Magneto's right: there is a war coming. Are you sure you're on the right side? 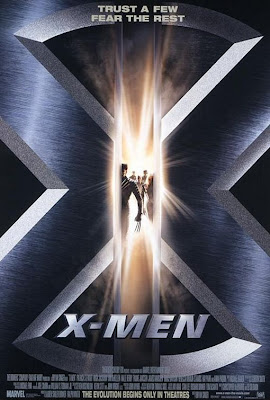 Hello I am the movie encyclopedia and if no one else will see it, I will.
Admittedly I am not the biggest comic book fan in the world. It's not that I don't love comics I do. I am a HUGE Frank Miller and Mark Millar fan as well as a pretty devout reader of anything Batman, Punisher, Spider-man or X-Men related. Can I ramble off useless trivia or issue numbers? No. Can I name every character ever in any of those series? No. But I know enough of each series to appreciate nostalgia and subtle references in film, game and TV adaptations of the comics.
Growing up I watched Batman the Animated Series and the Superman movies. But I always had a soft spot for the X-Men so when I heard they were doing a movie I was excited. They have most of the major staples of the X-Men (Storm, Wolverine, Cyclops, Rogue, Jean Grey, Xavier) and they were going up against a decently sized Brotherhood (Magneto, Sabertooth, Mystique, Toad). It wasn't everyone I loved but it was a really good start. Add great writing, great acting, phenomenal CGI and special effects (at the time) and you have a really good movie.
The story of X-Men is a simple one. There is a mutant academy led by Professor Xavier (Patrick Stewart). His arch nemesis is Magneto (Ian McKellen) who runs the Brotherhood. Magneto wants to take over the world with mutants and its up to Xavier's X-Men to stop them. There is a lot more to it but for the sake of letting people enjoy the movie and to not bore people with ALL the back story, that's basically the gist of it.
Everything about this movie was done with love and it shows. Granted the nitpickers could complain about inaccuracies and whatnot but those are always going to be inaccuracies. The characters are well developed and thought out. The writing is sharp and mixes great drama pieces with the occasional witty remark. The acting is top notch with every actor giving a great and believable performance.
This was but the first in the X-Men movie series but it will always have a soft spot in my heart. Two could arguably be better but this was the start, the reference point for all the upcoming films and a bar that was set high for everyone else. Sadly two rose to the occasion only for three and Origins to drop down a chasm of suckitude but the first one is a staple of comic book movie history.
MY VERDICT: TOP FILM
Posted by xTJMac510x at 12:38 PM