Do you ever feel like a chess piece yourself? In a game being played against your will. 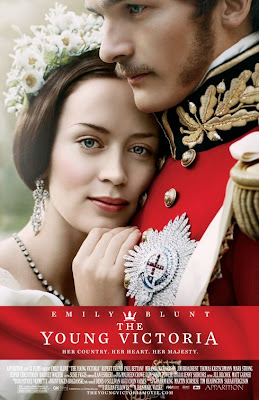 Hello I am the movie encyclopedia and if no one else will see it, I will.
Period pieces are always interesting to watch and they (for the most part) tend to be pretty good. For the most part period pieces (at least in modern cinema) seem to take place during the Victorian era and honestly why not? Big fashions, bigger hair, castles, kings and queens, cheating lovers, forbidden love I mean these movies practically write themselves. The latest of these period pieces is a small British film entitled The Young Victoria based on the reign of Queen Victoria and her early years as queen and romance with Prince Albert.
Emily Blunt plays Victoria, the queen of England who becomes queen when she is eighteen. She is young but she is strong willed and quite brilliant. But while some may disagree with her or her methods, one man Prince Albert, falls for young Victoria and its not too long before Victoria reciprocates. The story is fairly accurate to history and it should be: it's sponsored by the Queen, Sarah Duchess of York and is produced by Martin Scorsese. The script is written by Oscar Winner Julian Fellowes who won the Oscar for the great film Gosford Park. The director Jean-Mark Vallee is fairly unknown but does a great job with the film as well.
While I don't see this film winning any awards for acting (although to be fair Emily Blunt is wonderful when she's not shoving her accent down her throat to sound American) it certainly will for the aesthetics. The art direction, makeup and costumes are truly brilliant. Usually I don't notice things like that in movies but for this one it was really evident. A lot of work was made to make it as Victorian era as possible down to every bush, cheek mark and ruffled shirt. I only mention this here because like sound awards nobody really cares...which is a shame because when effort is shown like it is in this one it should get more attention.
Overall everything is pretty good. It's a bit sappy at times and it really is a girl power chick flick but if you enjoy well made period piece films then give this one a look.
MY VERDICT: SEE IT
Posted by xTJMac510x at 1:45 PM