I trust everyone. It's the devil inside them I don't trust. 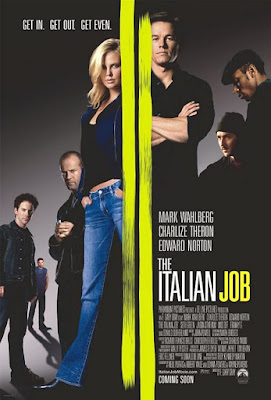 Hello I am the movie encyclopedia and if no one else will see it, I will.
The original Italian Job was an under appreciated classic with heists, fast cars and great acting. In the early 2000s, since Hollywood has essentially run out of original ideas, they decided to remake this unknown classic. Putting together a team of some of the best looking actors (or in some cases actors not working) together they were able to create a great BMW car commercial with plot put in between it. But that's not necessarily a bad thing...especially when you have Edward Norton as an antagonist.
The story of The Italian Job is this: A group of skilled thieves led by an old retired safe cracker and his daughter plan to commit one final heist. Everything goes according to plan except one of them (Norton) betrays them and leaves them all for dead. Vowing revenge the team bands together to get revenge on Norton.
This film is full of fast action and even faster car chases. There are explosions, kisses, espionage and pretty much everything you'd expect from a typical action movie. The acting is good for what it is and considering it has an all star cast it works out well for them. The movie is fast paced and never feels boring. Overall it's a pretty well done movie...
...except that it's pretty run of the mill. Everything about it has been done before and done better. But don't let that stop you from seeing it. Bored? Watch the Italian Job. A good flick for a boring day.
MY VERDICT: SEE IT
Posted by xTJMac510x at 1:46 PM