"It's gonna be alright, we're gonna be okay" "You don't really believe that do you?" 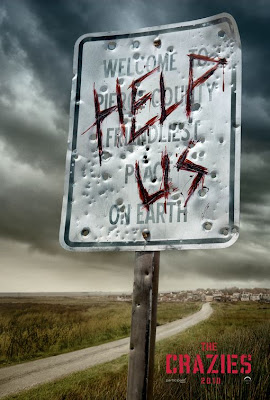 Hello I am the movie encyclopedia and if no one else will see it, I will.
Horror remakes seem to be as common as a Saw film nowadays. Michael Bay is hellbent on remaking every horror movie series from the 80s with his remakes of Texas Chainsaw, Friday the 13th and the New Nightmare on Elm Street and other recent films like Last House on the Left, Dawn of the Dead (and subsequently the remakes of Day and Night) and My Bloody Valentine have been crowding our screens nowadays. Honestly though, like most common horror movies, they all suck...that is with the one in a million exception. Every now and again a director and writer strike gold with a remake making it better (or almost better) than the original. Sadly though Dawn of the Dead and Last House on the Left are the only recent ones that come to mind but now I have another to add to the list: The Crazies.
The Crazies is the third film from Sahara director Breck Eisner and is written by Ray Wright (2006's Pulse) and Scott Kosar (TCM remakes and The Amityville Horror remake) with help from original director George A Romero. With the exception of Romero the credits didn't make me excited for the movie. Even the title made me laugh the first time I saw it. The film looked interesting but needless to say I went in with low expectations. When I walked out I was flabbergasted...the film was amazing!
The plot of the Crazies is pretty simple: In small town Ogden Marsh located in rural Iowa things seem pretty normal. That is they seem normal until a toxin contaminates the water supply. When that happens, slowly but surely each of the inhabitants of the town go completely crazy and suddenly die. The government gets word of this and quarantines the town shooting anybody on sight. Now a small band of people must get together and try to escape the town, or die trying.
The first thing I noticed about this film is how intelligent it is. Usually in horror movies, no matter how good they are, there are a lot of eye rollingly bad moments where you just want to yell "C'mon!" But surprisingly to me and everyone else in the audience there weren't that many in this film. Like The Descent the characters think before they act and actually use the thing between there ears. The second thing I noticed was the acting...it's top notch in this film. I personally think Timothy Olyphant is highly underrated and it shows in this film. His role is brilliant (no award winner by any means) and he was a joy to watch. Otherwise the supporting cast was quite good and very entertaining to watch, especially when everything started going crazy.
Another nice thing about this movie is it's unwillingness to rely on jump scares. Most horror films use that as a crutch but not this one. Yes they are in there but when they are used they are used smartly. The film also doesn't rely on gore to get a rise out of people. There are some extremely disturbingly violent moments and gory moments in the movie (I may actually have nightmares) but overall it is uses tension to create the scares and not the jumps or the gore.
Overall The Crazies is no award winner. But it DOES stand head and shoulders above most horror movies out there and it stands millions of miles above most to all horror remakes. Despite it's name and it's writer/directorial credits I suggest giving this one a look. A great film if you want a good scare.
MY VERDICT: TOP FILM
Posted by xTJMac510x at 2:35 PM