You had better decide whether you're hangin' on the cross... or bangin' in the nails. 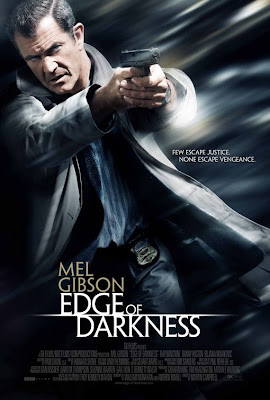 Hello I am the movie encyclopedia and if no one else will see it, I will.
If I go into a movie with REALLY low expectations then usually there met. If I know a movie is garbage ahead of time I just roll with it, swallow my pride and try to survive the madness. But every now and again a film that I perceive to be total garbage can end up surprising you. Maybe it doesn't change the way you think about films and maybe its as formulaic as a Madden game but it is enjoyable and holds your attention for a hundred minutes. That happened to me the other day with a film called Edge of Darkness.
Edge of Darkness is the newest film from acting legend Mel Gibson. I could sit here and make fun of Mel calling him a drunk who enjoys Sugar Tits and hates the Jews. But don't you think he's been through enough? That was a while ago and he's tried to do everything to make it up. He admitted he has problems with alcohol and got that fixed. I mean if anything else he has laid relatively low. He DID knock up his new girlfriend but otherwise Mel has kept to himself for the most part. The last film he did was 8 years ago! Since then he has directed two movies: Passion and Apocolypto. Both films I have grudges with for different reasons but needless to say I didn't enjoy them. I actually missed Mel on the screen. Was he my first choice? No (that's Edward Norton) but Mel is one of those people that really puts a lot of effort into his movies. And it shows in his newest movie.
The story of Edge of Darkness doesn't pussyfoot around. Detective Thomas Craven is a decorated detective who has worked hard all his life. He is a single parent with one daughter Emma who works as an intern at a scientific research facility. Thomas's wife died when Emma was young so he's had to take care of her for most of her life. One day Thomas goes to pick up Emma from the airport. After some small talk they get home only for Emma to get really sick. Emma insists they go to a doctor but as they walk out the door she gets a hole blown through her with a shotgun and dies almost instantly. Thomas begins to crack but is determined to find out why and who would kill his daughter.
It's nothing we haven't seen before. Corrupt politicians, political conspiracies, nuclear grade uranium, cop with nothing to lose, it's been done before and probably done better. But what makes this movie good is three key things.
1.The acting: Mel Gibson is a good actor whether you want to admit it or not. He gives a powerful and somewhat moving performance as a man who has lost everything in his life. He mixes the anger, the bitterness, the sadness and his slow slip into insanity quite well and is thoroughly enjoyable. The rest of the cast is top notch giving great performances that work well with number 2.
2. The writing: While uninspired and unoriginal the story makes up for it with superb writing, witty dialogue, great back and forth's and they keep all of of the done to death lines (Guy with nothing to lose, fasten your seatbelts) down to one long drawn out line. The story is interesting and I actually wanted to see what would happen next.
3. The directing: Martin Campbell, who is probably most famous for directing the recent Zorro movies and two Bond movies (Casino Royale and Goldeneye), is a great director. What a lot of people DON'T know is that he actually directed the miniseries Edge of Darkness which the film is a remake of. So the source material is in the same hands of he who made it and for us now that means that he knows how to handle the story.
Overall it's not an epic film or a film that will stand the test of time. But it's a History of Violence-esque brutally violent thriller with great writing, great acting and great directing. I know I am just one critic and there are people who will HATE this movie. But I stand by my decision. This is a good movie. Not GREAT but definitely worth seeing in theaters.
MY VERDICT: SEE IT
Posted by xTJMac510x at 4:06 PM