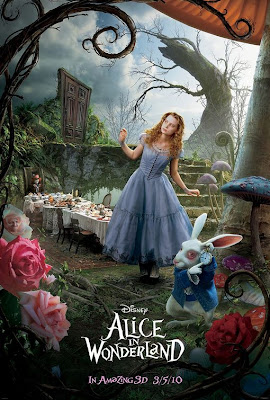 Hello I am the movie encyclopedia and if no one else will see it, I will.
This is a really tough review to write. Lewis Carroll's "Alice in Wonderland" and "Through the Looking Glass" are two of my favorite books of all time. They are dark, witty, tongue in cheek and quite brilliant. I'm such a fan I even have Jabberwockey completely memorized (not easy!). The Disney version of Alice in Wonderland, the original that is, was one of my favorite Disney movies. It was dark, twisted, funny, charming, colorful and quite entertaining. It was trippy but a great kind of trippy. Since then I haven't been able to find a truly brilliant re-imagining of this wonderful series.
The only two close things were the highly underrated but amazing kids show Adventures in Wonderland:


God I miss 90s animation...sigh. That show, while totally kiddie and outrageous was amazing in it's own right. The characters were fun, well thought out and the stories were genuinely interesting. It wasn't the best show and it certainly had it's flaws but it was enjoyable for a young kid like me.

And the other was the recent Sci-Fi original miniseries known simply as Alice:

From the Brits who brought you Tin Man, Alice was a much darker, surrealistic and grim version of the famous story with the characters being more down to Earth and realistic which was quite brilliant when put to such a surreal backdrop. Everything about it was awesome and everyone should give it a look. Sadly though, as awesome as it was, it was NOT as good as the original Disney film.
Then one day I opened a magazine and saw Johnny Depp's mug plastered on a green backdrop. He was holding a teacup, had orange hair and looked like a mental patient. At the bottom it said Alice in Wonderland, Disney and Tim Burton. When I heard it was a direct sequel I became even more interested. With Disney on the reigns it couldn't possibly be bad right? Well Tim Burton wanted to prove me wrong I guess.
The story is this: Alice (Mia Wasikowska) is 19 now and it's ten years after the first movie. She constantly has these nightmares about two strange men, caterpillar's smoking hookah's and other disturbing thing. She is an independent girl but is being forced into a marriage with a guy she doesn't like. One day she sees a white rabbit, follows it and tumbles into Wonderland, I mean "Underland," and steps into an all out war between the Red Queen (Helena Bonham Carter) and the White Queen (Anne Hathaway). She soon discovers that she is the chosen one and must slay the Jabberwockey and stop the Red Queen.
Burton and Disney completely take a dump on the original source material and take a leak on the original film. I hate to use such graphic terms but it's true. They have no respect for their predecessors and don't really care. Burton is totally predictable and boring now, with everything he does being scouted a mile away.

"Oh look! Dark characters, a pale but lovable Johnny Depp, his wife in a big role, dark environments, a dark and twisted undertone, disturbing and gothic visuals and all while being sarcastic, witty and tongue in cheek about everything so you can appeal to kids and adults! Like OMFG! SHUT THE FRONT DOOR THAT'S NEVER BEEN DONE BEFORE!" It borderline pisses me off about the visuals too. He put a lot of effort in yet no effort into them. The effects are cheaply done, the CGI is fake, the 3D is a gimmick, and it's kinda gross to watch.
The acting is the true saving grace of this film. Depp continues to be one of the most hard working and entertaining actors in the game and really brings a minor character like the Hatter to life. He is funny, energetic and a thrill to watch. Carter overshadows even Depp as the Red Queen giving one of her best performances ever. She is funny, quick witted, her delivery is great and her expression is amazing. Anne Hathaway is darkly funny and interesting to watch but gets overshadowed by the Depp/Carter duo. Alan Rickman, Crispin Glover, Stephen Fry, Michael Sheen, Christopher Lee and Matt Lucas are all awesome in their supporting, but fun roles. The only REAL acting problem is with Mia as Alice. She never really engulfs that heroine persona and seems sleepy or bored most of the time. She lacks a driving force, a fire in her eyes, honestly anything to make her more interesting.
So is Alice in Wonderland a good movie? That's the bottom line. Well yes and no. While Burton is grating on the nerves and his visuals are cheap, cheesy and corny, I do applaud his casting (save Alice) and his desire to let them run with the film. The acting is entertaining for adults, the visuals (as bad as they are) will make the kids and tweens happy (they saw New Moon so they'll buy into anything) and overall it could have been much worse.
So that being said, if your a fan you'll eat it up, if you are a kid you will love it and the adults should be mildly amused. Still not the Alice I hoped for though...
MY VERDICT: RENT IT (Basically 2 stars. I mean it's not for everyone but it's at least worth a rent)
Posted by xTJMac510x at 3:00 PM

Email ThisBlogThis!Share to TwitterShare to FacebookShare to Pinterest
Labels: kids, Rent it