As much as it pains me to say this...and it really does..I gotta take you to jail 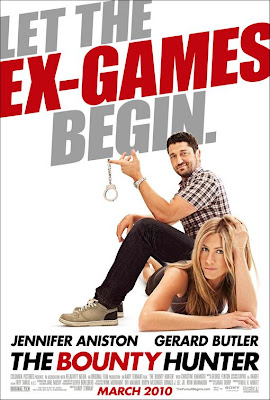 Hello I am the movie encyclopedia and if no one else will see it, I will.
Can I make this review as short as possible? Butler is funny but still can't do a good American accent, Aniston hit her peak in 2000 and the plot is terrible and unfunny. Don't see it....
...Fine I will do a full review. The Bounty Hunter is the story of two people: Nicole and Milo. Nicole is a newspaper journalist who is being stalked by her creepy co worker Stewart whom she made out with at the Christmas party. Nicole is also investigating a story that could involve corrupt cops. Nicole was also arrested for assaulting an officer and has officially missed her court date. Who do they send after her? Why her ex husband Milo. Milo is a smarmy tool who used to be a cop. When he was kicked off the force he took a job as a bounty hunter because it was the closest thing to being a cop he could think of. He is also a gambling addict and has an 11 thousand dollar debt he needs to pay. So when he learns that he will be offered 5,000 to bring in his ex wife he is ecstatic. But things get wacky when Milo gets dragged into the whole corruption investigation and he must HELP Nicole...while also trying to bring her in.
The plot is pretty formulaic and you know EXACTLY what will happen every scene. It's been done to death and honestly its not funny anymore. Jason Sudeikis as Stewart is funny but not funny enough to make the movie worth watching. The acting is also abysmal too with stereotypical actors doing stereotypical roles. Honestly Gerard was the only good actor in the whole film..and even I'm (a devout Butler fanatic) willing to say that's not exactly a great thing, especially with his last few movies (besides Law Abiding Citizen).
Butler needs to pick better movies, Aniston needs to stop acting and these kind of rom coms need to stop being made. Please avoid this one...please?
MY VERDICT: ABOMINATION TO CINEMA