Okay, just to be clear here, our options are: die here, die in the tunnels, or die in the streets. That pretty much it? 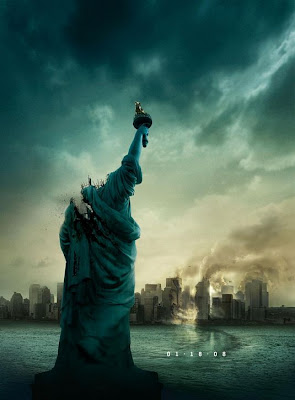 Hello I am the movie encyclopedia and if no one else will see it, I will.
If you have been a consistent reader of TME then you would know I hold great respect for films that take the cinema verite approach to making films. It's really easy to make big budget films, just ask Michael Bay, but it's really hard to make a big budget film that LOOKS like it was made cheaply and make it seem believable. Films like REC (and its sequel) and Quarantine got that idea down and Paranormal Activity, whether you liked it or not, did too. But one film that ignored for the longest time was probably one of the first cinema verite movies in MY lifetime to become popular, Cloverfield. Whether it was the supposed Dramamine inducing headaches, the warnings on the theater doors or my general distaste for monster movies, I stayed FAAARRR away from this movie. But one day I found this film in the bargain bin of my local store and, after doing some intensive studying on the film, I figured what they hey and picked it up. If nothing else I'd get an 75 minute (its 80 with credits) monster movie I could make fun of. But after watching all the behind the scenes stuff and how much work they put into it, as well as actually sitting down and watching this movie I realized "Wow...this is actually a really good movie!"
The plot is simple and works because of that. Rob is going to Japan and is thrown a surprise party. Rob's brother Jason and his fiancee Lily are assigned to record testimonies for the party from friends of Rob. Well Jason has the attention span of a newt and pushes the camera onto Hud, Rob's sarcastic and pessimistic best friend, who takes the job after he learns his crush Marlena is going to be there. Things seem to be going well until Rob's ex girlfriend Beth shows up. They fight, she leaves and the lights go out. From then until the end it's basically Hell on Earth as Rob, Hud, Lily, and Marlena run around the city trying to avoid whatever is attacking the city and save Beth.
A lot of people will complain that you don't see enough of the creature or that the first 18 and a half minutes are totally boring. I would have to disagree. I think the mysteriousness of the creature and the fear of the unknown really add to the tension of the film. That and when you DO see it, it's pretty badass. As for the first 18 minutes...yeah they are really slow but they work. Most to all of the character development as well as most of the plotline are IN that 18 minutes and unless you wanted a bunch of first person people running around for an hour, those 18 minutes are necessary.
As for the acting, I thought it was quite good. I found it funny how much of the cast from She's Out of My League was in it, but for the most part the acting is great. They are realistic, believable, not stupid (for the most part) and don't make idiotic decisions. It's like if someone was experiencing this for real instead of on film. And I think that really works in the film's favor. The effects are brilliant and the monster design is great.
My only concern and issue is that with most POV films and that is the shakiness. It never really bothered me but it bothered everyone else watching it with me. It's a bit dizzying at time and there are a few moments where I thought the film had froze and that was only the special effects used for the camera. But these irks aren't that bad to me but could piss a lot of people off.
A film that I had previously given no chance turned out to be a great, cheap, thriller that was entertaining from start to finish. An ingenious movie. Give it a look.
MY VERDICT: OWN IT
Posted by xTJMac510x at 4:13 PM