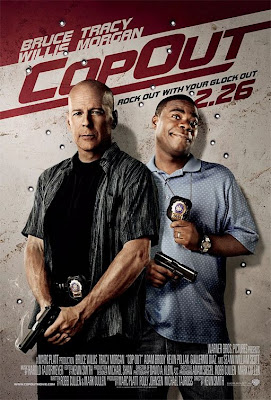 Hello I am the movie encyclopedia and if no one else will see it, I will.
I have always been a huge fan of Kevin Smith not only as a director/writer/actor but as a person as well. He's outspoken, fun to listen to, speaks his mind and doesn't take crap from anyone. That being said I was worried when I heard about Cop Out. First off it was NOT written by Smith. Smith, whether you like him or not, has a great sense of life and humor in the real as well as great tongue in cheek wit that can't be beat. But Cop Out is NOT that. Cop Out is a mildly entertaining and harmless buddy cop comedy that has great direction but lacks direction (if that makes any sense).
The story is this: Jimmy and Paul are two police officers who have been partners for a long time. One is more reserved and badass and the other is a mumbling incoherent idiot (or maybe that's just Morgan's acting). They get suspended after a bad night and soon after Jimmy learns that his daughter is getting married and its going to cost a lot of money. Jimmy plans on selling his favorite baseball card but things take a turn when Dave (Sean William Scott) steals the card and Paul's favorite gun. Things turn into a drug/gang thing and that's about it. It's decently written but has some oddly serious moments as well as some weird scenes that could have been cut. There is also, in my opinion, too many poo jokes. How old are the writers 3?
The acting is subpar at best. Willis wonders why he's in this, Morgan is idiotic and Scott is actually probably the funniest thing about the movie. Otherwise it's mediocre acting with a few shining moments but not many. It has some funny parts but overall the comedy like I said is very immature.
It's worth a rent but honestly I expected a whole lot more out of Smith. Then again I can't really blame him since he didn't write it...right?
MY VERDICT: RENT IT
Posted by xTJMac510x at 3:38 PM