There's no such thing as a stupid question, until you ask it 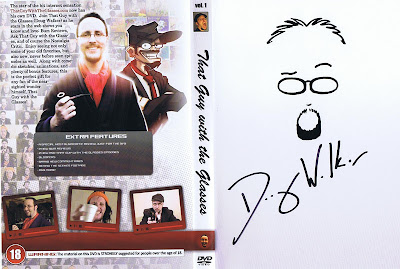 Hello I am the movie encyclopedia and if no one else will see it, I will.
If any of you have listened to the newest episode of "The Demented Encyclopedia" or have been reading my blog for a while you should know that I am a huge fan of Doug Walker aka That Guy With the Glasses. His site, thatguywiththeglasses.com has been a favorite of mine for two years. So needless to say I was certainly blown away when I heard that he was coming out with a Best of Volume 1 DVD. As a big fan I clicked on buy so quickly that Rain from Ninja Assassin couldn't have done it faster. And in three days flat my copy arrived in the mail. And as a super fan I also made sure to get the autographed edition, mostly because it makes the cover all the more awesome. Don't believe me? 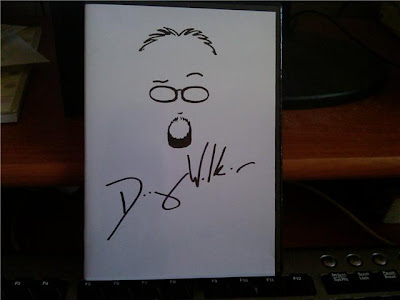 See it IS more awesome like that.
Anyway I figure since I review movies and TV and DVDs when they come out that this should be no exception. I'll try to be as un bias as possible but you will have to excuse me if my inner fan boy comes out.
That Guy with The Glasses Volume 1 contains 6 hours of footage from That Guy With The Glasses. Along with featuring a few of his non-copyright protected Nostalgia Critics (in which he reviews older movies) like Transformers the Movie (80s cartoon version), Tedy Ruxbin, Casper, Cloverfield and a few of his Nostalgic specials like the Harry Potter book opening, and the Cloverfield trailer this DVD also includes a special never before seen DVD exclusive episode of Turkish Rambo aka Rampage. The Rampage review is good despite not being his funniest but it does include some great lines, one brilliant inside joke and one scene that will go through my head for a while involving Rambo and Street Fighter.
Also on this DVD is a bunch of his Bum Reviews (in which he plays a crack addicted bum who tells you the plot to a movie with spoilers). Along with favorites like Watchmen, Twilight, and Speed Racer, this DVD also includes TWO brand new episodes of Bum Reviews in which he reviews Paranormal Activity and GI Joe. Both are hilarious and both are certainly worthy of buying the DVD for.
Also on here is a large chunk of his Ask That Guy With The Glasses' and two brand new DVD exclusive episodes (imagine Ask a Ninja but eviler and snarkier). Both are hilarious but feel short. That's okay though since all the episodes watched together are a hilarious watch.
Finally there is a great array of other material like sketches, cartoons, interviews, Spooning With Spoony, bloopers, alternate/outtakes and much much more. The bloopers are great with the Alone in the Dark Bloopers (which clock in at 13 minutes) particularly hilarious.
Overall this DVD is jam packed with great content, exclusive content and it makes you itching for Volume 2 to come out. A great DVD and it you don't like it, just go to the site...it's free!
MY VERDICT: TOP FILM...ER DVD!
Posted by xTJMac510x at 2:39 PM

Email ThisBlogThis!Share to TwitterShare to FacebookShare to Pinterest
Labels: That Guy with The Glasses, Top Film