You have no idea what you're dealing with 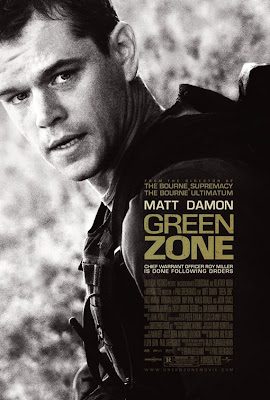 Hello I am the movie encyclopedia and if no one else will see it, I will.
I actually really like Paul Greengrass. His minimalist approach to film making, especially in recent years is quite intriguing. The Bourne movies felt like they were shot hand held, the action was chaotic, the sound mixing and editing was the best I had ever seen in a film, and it was an intense ride from start to finish. It only had one problem: Matt Damon. Those who have known me for a while know that I despise Damon. He's a decent enough actor and HAS had some really good films but he is just so cocky and narcissistic that I can never like him as a person. And no matter how much people tell me otherwise, this opinion is NEVER going to change. That being said I was actually excited for the fourth Bourne movie to finally come out and now it's here...wait...this isn't a Bourne movie? You sure? Oh well...it may not be a Bourne movie and it may have Matt Damon but Green Zone is still a DAMN good movie.
The story of Green Zone follows Roy Miller (Damon). He is a warrant officer who works with the CIA. One day, after they apprehend a criminal, a bunch of US special forces came in and took the criminal away, and punched out Miller while in the process. Confused Miller goes to Martin Brown (Brendan Gleason), the CIA Baghdad bureau chief and together along with a reporter named Lawrie (Amy Ryan) they go searching for the truth behind the weapons of mass destruction, something Clark Poundstone (Greg Kinnear), a Pentagon Special Intelligence officer, doesn't want to happen.
I gotta say that this is a damn good thriller even with it's flaws. The characters are stereotypical cardboard cut outs and their lines are mad libs of other Iraq war movies but the acting is good enough that it doesn't feel weak or cheesy. The camera is shaky and can affect a lot of people but it also has that minimalist style and swagger that made Greengrass so good. The action is chaotic and confusing but it's also in your face, non stop and entertaining.
Overall it's a great thriller, a controversial war movie, fun to watch and although it has Damon and it feels like Bourne 4, it's still a really great movie. Give this one a chance.
MY VERDICT: OWN IT
Posted by xTJMac510x at 6:33 PM