You're not dead are you? 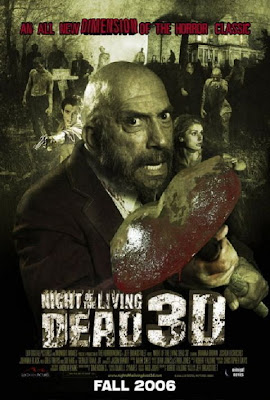 Hello I am the movie encyclopedia and if no one else will see it, I will.
Now I'm no Bargain Bin B movie kind of guy, granted I've seen my fair share of B movies (including all the Turkish rip offs) but for the most part I try to AVOID these kinds of movies just for the sheer reason that I know that they are bad. But sometimes you find a movie that is SO bad, it's hilarious and almost becomes a campy cult classic. Granted those are few and far between but for the most part I tend to get lucky. Well when I heard that George A Romero's classic Night of The Living Dead was public domain (which means anyone could redo it) I kinda set out to find the different versions. One stuck in my head though: the 2006 3D edition of Night of the Living Dead. Why? Maybe because of the cheesy pre Avatar 3D effects or maybe it was because Sid Haig was in it. Either way I sat down and watched this one and let me tell you...it was bad...and not in a good way.
The story is basically the same if you ever paid attention to the story of Night of the Living Dead. A guy and girl head to a funeral, guy gets attacked, she runs to an abandoned farmhouse (or pot farm in this case) and holes up with a family and a bunch of misfits. The dead have risen and now its up to them to survive the attack and find safety. That's the extent of the story and honestly it's nothing too different from the original. The only difference is that they added Sid Haig as an evil mortician and they made the dialogue a whole helluva lot stupider. Honestly that quote at the top is one of the smartest lines.
The acting is abysmal, save for Haig who does an actually decent job, and the plot holes are huge. Nothing in this movie makes sense, they mock the audience by playing the original in the background, the dead are stupid, the people are stupider and its basically a waste of time. The effects are cheesy and the 3D is dull. Overall a pretty shitty movie.
So please don't watch this...go watch the original. Please?!
MY VERDICT: ABOMINATION TO CINEMA

Email ThisBlogThis!Share to TwitterShare to FacebookShare to Pinterest
Labels: Abomination to cinema, Horror