Thank you for nothing, you useless reptile. 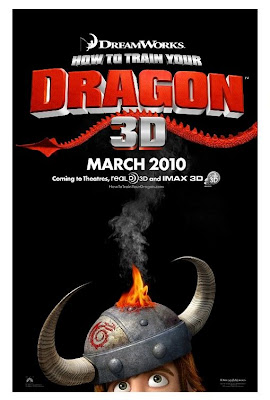 Hello I am the movie encyclopedia and if no one else will see it, I will.
You know what? I may be almost 19 but I still love watching animated movies, especially if they are good. You know what else I love? Viking movies? And would you believe I love dragons too? So basically this seems like it would be the best movie ever for me right? Well How to Train Your Dragon IS a pretty good movie but has a very uneven screenplay.
The story follows Hiccup Horrendous Haddock III (Jay Baruchel), a young teenage viking who doesn't fit in. He has an offbeat sarcastic sense of humor and he is quite bright, something that all the other vikings can't stand. It doesn't help that they are also at constant war with evil dragons that are trying to kill them. Hiccup's father who is the chief (Gerard Butler) is disappointed in him but puts him in dragon training anyway thinking it will help him out. Gobber the Belch (Craig Ferguson) is the head of finding new recruits and along with Hiccup recruits a bunch of people, one named Astrid (America Fererra) whom Hiccup befriends. One day however Hiccup entangles one of these "evil" creatures and befriends it. He nicknames it Toothless and tries to train it to become his pet. This angers his father but Hiccup is determined to change his ways.
The writing is really odd for me. The screenplay is both really deep and really shallow at the same time. There are some really good character developments and really good twists and turns but for some reason it seems like it's been done before in other "Coming-of-age" films. The writing is hilarious at times and sometimes groan inducingly cheesy. HTTYD suffers from being a kids movie that wants to be more than that. It wants to take that edgy Shrek approach that bordered on adult and kid movie but the movie tends to teeter more on the kids side, leaving some of the writing to seem out of place. That being said the film is only 98 minutes so it's not like your sitting through an overly long film. The pacing is quite good and a good story is told. It just seems uneven at times.
The acting is great and its interesting to see such a huge star studded cast full of comedians. You have Jay Baruchel, Jonah Hill, TJ Miller, Craig Ferguson, Christopher Mintz-Plasse and David (DOCTOR WHO) Tennant who are hilarious comedians and then you have America Fererra who is good but not great and Gerard Butler who actually sounds normal in a movie for once (aka not talking out of the side of his mouth).
Overall HTTYD is a good kids movie with great 3D effects and great acting that suffers from an uneven screenplay. Worth a look for kids and adults.
MY VERDICT: SEE IT
Posted by xTJMac510x at 2:29 PM