Do I really gotta be the asshole who says we got in this thing and went back in time? 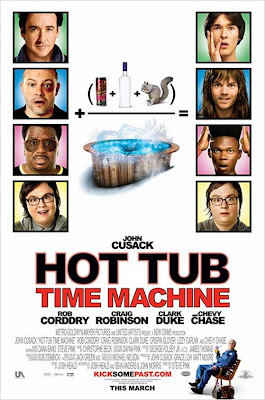 Hello I am the movie encyclopedia and if no one else will see it, I will.
To say I had LOW expectations for this movie would be an understatement. The title alone almost guarantees that it will be a piece of crap or at least a B movie and the actors don't thrill me. You have the comedy sidekicks of the world teaming up with John Cusack and giving them free reign to be silly. I thought this movie would be horrible. But oh I was wrong. If you take this movie seriously I will punch you but like the Hangover before it, Hot Tub Time Machine proves to be a balls to the wall laughfest that kept me enjoyed from start to finish.
Here's what happens: Lou (Rob Corrdry) is a party animal and heavy drinker who passes out with the engine on. His friends think he's suicidal, despite what Lou keeps telling them, but jumps at the opportunity to go back to an old ski lodge where they used to party back in the day. Problem is the ski lodge, the rooms and the hot tub have turned to crap and it's NOTHING like they remember it. But nostalgia, some beers and a hot tub repair later change all of that as they get in the hot tub and are transported back to the 80s. From there they have to figure out how they got there, how to get back and how much alcohol they can hold in one sitting. The hijinks are hilarious and the nostalgia is at a fierce peak in this movie. If you were born or know stuff from the 80s its in here. Some of the funniest stuff involves paradoxes and time problems like conversations involving emails and a call from Craig Robinson to his wife who is still in grade school.
The acting is actually pretty good for the most part. Corrdry brings that Daily Show background and provides great deadpan and sarcastic humor to it all. He says the stupidest and raunchiest stuff with the straightest face and with such sincerity and with such earnest. Craig Robinson is always funny and continues to be hilarious in this. Cusack does good but maybe that's because its from the people who made Grosse Point Blank. And Clark Duke is funny but mostly provides the nerdy stereotype to every situation. It was actually nice to see Chevy Chase though since he brings that Community esque "crazy old man" vibe. He's always funny though.
It's stupid, full of F-Bombs, raunchy and dirty but it is hilarious. Not since the Hangover have I seen a male bonding raunchy comedy that was THIS funny. People will hate it but I loved it.
MY VERDICT: OWN IT
Posted by xTJMac510x at 1:39 PM