What you wear makes a statement to women and your statement is "Hi welcome to Blockbuster!" 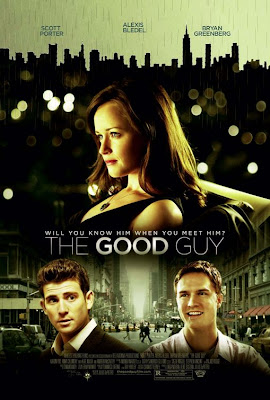 Hello I am the movie encyclopedia and if no one else will see it, I will.
Indie romantic dramas can either be hit or miss. Sometimes we have flops like Moonlight Sonata and then sometimes we have 500 Days of Summer. Well the Good Guy is neither. It's not a piece of crap but it lacks that serious umph to make it truly memorable. But thanks to a good cast and witty writing it does make it at least worth watching.
The Good Guy is the story of Beth. She is an urban conservationist and Manhattanite who is just trying to have the perfect life. She wants the great high paying job, she wants the friends that are always there for her and of course she wants a great guy to spend time with. One day he meets Wall Street hotshot Tommy. He's a good guy with a bit of an ego. His best friend Daniel is a little more sensitive and sweet than Tommy but they get along great. Beth falls for Tommy but soon finds herself in a bit of a predicament when she also falls for Daniel. Complications arise and now she has to figure out who is really the best guy for her. The plot then turns into your usual romantic comedy/drama fare but that's not exactly a bad thing.
It's really hard not to like Alexis Bledel. Sure she isn't the greatest actress but she always does a fairly good job and if anything all she has to do is act cute and bat those gigantic blue eyes at the screen and the audience will fall for her. This movie is no exception. Scott Bryan and Bryan Greenburg do a good job as Tommy and Daniel but they seem a bit stereotypical and predictable. Overall though the acting is decent and there aren't any real hitches.
It's forgettable, sweet and mildly entertaining at most. If you like chick flicks or indie romantic comedies than give it a look. It can't hurt.
MY VERDICT: RENT IT
Posted by xTJMac510x at 7:34 PM