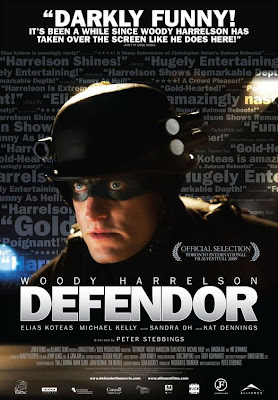 Hello I am the movie encyclopedia and if no one else will see it, I will.
What do you get when you put Woody Harrelson, an actor who has made a huge comeback with great films like The Messenger (with Nick's favorite Ben Foster) and Zombieland, and let him be himself in a costume? You get one of the quirkiest, most funny dark comedies I've seen in years that sadly got ignored by America.
You see here is the story. Defendor was written in 2005. But because of it's odd story, studios would not accept it and kept pushing it away. In 2007, Darius Films and Telefilm picked up the film and promised to fund a good portion of film. It suffered another setback when, in 2008, it was pushed back until 2009. It filmed in 2009 and was shown at the Toronto Film Festival where Sony Pictures picked it up. The only problem was that Sony did not want to release it in the US but instead everywhere else. Darius Films did not like that so in February it was shown at a limited number of theaters. Luckily they played it at my local artsy theater for one week so I was able to see it, although it IS coming out on DVD quite soon from what I hear.
The plot to Defendor is this: Arthur Poppington is your normal guy. The only problem is he's a violent, delusional psycho who believes he is a superhero named Defendor. Defendor is dressed in black with raccoon eyes and a giant D duct taped on his chest. His main goal is to take town Captain Industry, the evil mastermind of his delusion. In the process he pisses off the wrong people but, thanks to his MacGyver esque traps and weapons along with a young prostitute (Kat Dennings) they are able to try and fight Captain Industry.
The humor is drop dead, roll on the floor funny. Harrelson outdoes his Tallahassee performance as not only a badass but a tongue in cheek deadpan comedian. Every line is just either totally over the top or so deadpan its ridiculous. The entire quote at the top is said quietly and very serious although it is totally hilarious to watch. Defendor's interactions with everyone are hilarious and overall he is just brilliant to watch. I would go so far to say that its HIS best performance. Dennings is also quite good and pretty underrated. Sandra Oh and Elias Koteas are also quite good as well in their supporting roles. Overall acting is top notch.
The action is great, the humor is phenomenal and so is the acting and its a treat to watch from start to finish. You must get this when it comes out, you won't be sorry.
MY VERDICT: TOP FILM
Posted by xTJMac510x at 11:10 PM