Villainy wears many masks, none of which so dangerous as virtue... 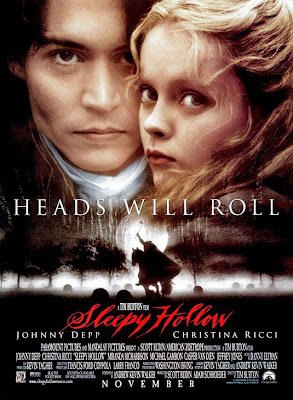 Hello I am the movie encyclopedia and if no one else will see it, I will.
Hey hey hey kiddies it's time for a Tim Burton movie (cheer). There really is no need to go into any more detail about Tim more than I already have: he's a creative, twisted and dark mind who loves Gothic over and undertones and he enjoys his good ol' fashioned blood spurts. So what is he tackling this time? Why a timeless tale told a hundred times before! So what is this Gothic Johhny Depp/Christopher Walken masterpiece? Sleepy Hollow.
Those who grew up in the Disney animation era will know that Sleepy Hollow is one of the most terrifying cartoons ever made. For the most part it's a well animated, funny, quirky story that's great for kids....but the last ten-fifteen minutes are poop your pantsingly scary. Seeing that Headless Horsemen chase after Ichabod and throw his flaming pumpkin head at him and kill him?! God I had nightmares for years. I was afraid to go outside. It didn't help that shortly after I watched that I watched this. One of my first R rated movies, this made me even more afraid of the Horsemen and so for years I was terrified of him. Thanks Tim Burton...douche...
With that being said let's get into the film: Ichabod Crane (Depp who else) is a constable from the city sent in to solve the case of multiple brutal slayings that have been happening around town. He's a shy, introverted and awkward type who can faint at the drop of a hat but he is also quite brilliant. The town believes the culprit is a man known as the Headless Horsemen but Crane would believe differently...that is until he sees him face to empty void. Now it's up to Crane to stop the Horseman and figure out why he keeps attacking people.
Needless to say Depp is amazing in this movie. It's no surprise to anyone that Depp is great at playing quirky characters and Crane is one of the quirkiest. His tone and dry wit are hilarious and every time I watch this movie I always get a chuckle out of his performance. Ricci is great as well, considering how young she is and of course Chris Walken is brilliant as the Horsemen...even though you don't really see his head. Overall pretty solid acting all around. The action is good as well although there are certainly a few moments of "What the F**k?" stupidity in this movie, which brings down the intelligence of this film slightly. The blood and gore is handled well in this film although there are a few over the top moments, although that is to be expected from Burton. The music is great and the cinematography is brilliant as well.
Overall not Burton's best film but still an entertaining horror film and a good retelling of the classic tale of Ichabod Crane.
MY VERDICT: SEE IT
Posted by xTJMac510x at 4:22 PM