Underwear would be fine...if I were wearing any 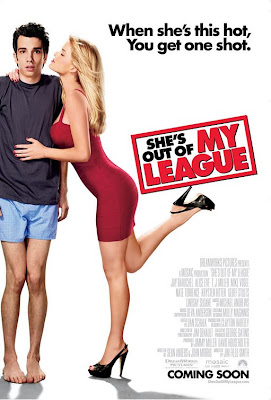 Hello I am the movie encyclopedia and if no one else will see it, I will.
Everybody has that kind of film. That film that they inexplicably love. The one that others may hate and some can't understand why you love it but you don't care, you love that film. She's Out of My League is that film for me. It mixes all of my favorite things about comedies as well as romance films, throws in some great acting and writing, a kick ass soundtrack and it was the first film in a while that made me CRY LAUGHING OUT LOUD more than once.
She's Out of My League is a sweet but sassy comedy from first time director Jim Field Smith and written by Sean Anders and John Morris (of Hot Tub Time Machine, Sex Drive and the underrated Never Been Thawed). It stars one of my favorite up and coming comedians (and a dead ringer voice and mannerism wise for my cousin Jimmy of Diary of A Mad Film Fan) Jay Baruchel who plays Kirk, a hopeless romantic and TSA agent with dreams of becoming a pilot. He works with his three best friends Stainer (TJ Miller), a foul mouthed Hall and Oats cover band singer, Devon (Nate Torrence), the sappy sweet guy who is inexplicably the only one married, and Jack (Mike Vogel), a laid back ladies man with a heart of gold. One day after being denied yet again by his ex, Kirk meets Molly (Alice Eve) a total babe. Molly accidentally loses her phone and Kirk has to return it. Upon returning it Molly starts to fall for Kirk, something Kirk, his friends and family, and the audience cannot understand.
From there hi jinks ensue that are sweet, raunchy and totally hilarious. Most of them you probably have seen in the trailers like arriving too soon in his pants or him losing it on the plane but this film is full of hilarity. It's also really a sweet movie too that shows that even if you're an unattractive guy that if you be yourself than you can get even the hottest British models (yes Alice Eve is a model and British).
It's a raunchy comedy with heart like Role Models and I Love You Man. The acting, writing, directing, comedy and pretty much everything are top notch. I can see why some may not like it either it's too cartoony, too raunchy, too over the top or too sappy...but I love this film and even after a second viewing it's still just as funny. A great date night movie and a great comedy altogether.
MY VERDICT: TOP FILM
Posted by xTJMac510x at 3:40 PM