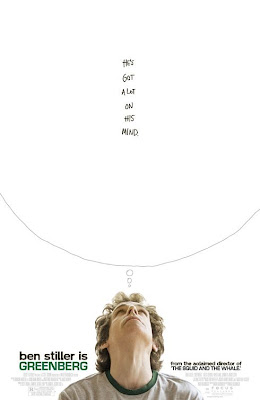 Hello I am the movie encyclopedia and if no one else will see it, I will.
I get it. Not all films are supposed to be exciting and engaging. Sometimes films with little to no plot are often pretty well received by most artsy film critics. I get sometimes films are trying to portray REALISM and show REAL LIFE situations handled as REALISTICALLY as possible. And I understand not all films need likable people. Sometimes totally unlikeable people can be fun to watch. Greenberg is all of this. The only problem is it sucks.
Here is what I gathered from the plot. Roger Greenberg is a drifter type who lives life however he feels like it. He is cynical, pessimistic, narcissistic, indulgent, rude and quirky. He returns to LA to do some house sitting for his brother. He's trying to find a purpose for everything but doesn't care enough to do anything about it. He feels out of place like he doesn't belong with society. But one day he calls their family assistant Florence who knows where everything is and how everything works around them. Florence just broke up with someone and wants to stay away from relationships. She is a college grad who can't find a real job. She is as out of place as Greenberg. They do stuff... Really stuff is the only way to describe it because half of it is boring, mundane stuff with a few chuckles.
I will say though the acting is great. Ben Stiller IS Roger Greenberg to the core and the role is perfect for him. Greta Gerwig is brilliant and so is Rhys Ifans and Mark Duplass. The direction, or what little there is besides "Go!" is pretty good and the scenery is nice. So why is it bad? It's mundane and boring and has no point. The writing is dull and ALMOST humorless and Greenberg and for that matter most of the characters are totally unlikeable. I wasn't the only one because about 3/4 of the audience left during the movie. God I hate my credo sometimes.
It wasn't abysmal though and the acting is quite good. But I just didn't get the film and it was too artsy for my taste. Blandness is blandness no matter what you smear on it.
MY VERDICT: AVOID IT
Posted by xTJMac510x at 12:13 AM