Do what you do best...chase after the girl! 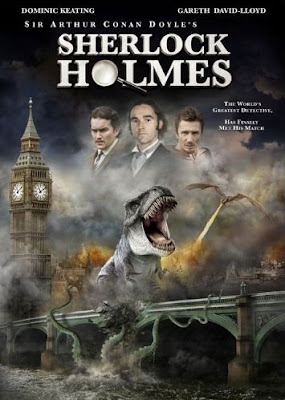 Hello I am the movie encyclopedia and if no one else will see it, I will.
For years I have heard about the B movie studio juggernaut known as The Asylum. Since 2000 they have made mockbuster (spoof on blockbusters) after mockbuster. To tell you the truth most of them suck pretty bad. I will give Asylum credit for going outside the box though with what little budget they actually have. One of the more recent mockbusters that has come out is a film simply known as "Sir Arthur Conan Doyle's Sherlock Holmes." No this is not the Guy Ritchie version with Robert Downey Jr. (although its funny how Holmes brother calls him Robert) and Jude Law, no instead this one focuses on Sherlock Holmes vs Dinosaurs, Octopuses and Dragons...
...I'm serious. The plot is that a ship carrying gold was attacked by what some bystanders called a monster. Nobody believed it really since monsters seemed like a preposterous idea, that is till the giant octopus showed up as well as a dinosaur and a dragon. It's hard to dismiss THAT as preposterous after that. Well its up to Sherlock Holmes and Dr. Watson to defeat these creatures and find out what's going on. Twists and turns are abound as not only do they fight these creatures but ROBOTS as well. It's honestly hard to take this plot TRULY seriously but considering it IS a B movie and that it's actually more loyal to the book series (if you'll believe that) the story is almost better than the Downey version. Granted I enjoyed the Downey story better but I was at least entertained and shocked when the twist came.
The acting is...well they're acting. It's not that it's bad but if you can accept the movie for what it is than it's really not that bad. Like I said, it's closer to the books and entertaining and if nothing else T-Rex vs Holmes is a funny situation to see, although like the Cloverfield monster I have no idea how it sneaks up on people considering its size.
Overall the Asylum has crafted one of their better mockbusters even with an absurd plot and spotty acting. If nothing else it's entertaining, fun to watch and it's certainly action packed. A decent film and great B movie overall.
MY VERDICT: RENT IT
Posted by xTJMac510x at 10:53 PM