A job is a job right? 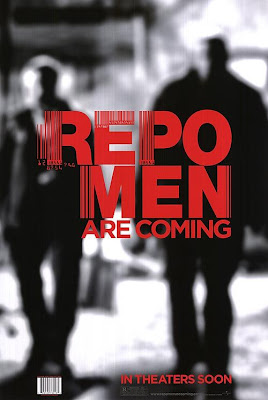 Hello I am the movie encyclopedia and if no one else will see it, I will.
Alright I will get the obvious out of the way first: Yes this is a rip off of Repo! The Genetic Opera. The differences being that there is no singing in this one and while the story is similar, they branch off in different ways. This is more a rip off in the "ideas" department than plot, although they are similar. That being said if I complained about every unoriginal movie that stole ideas and plot points from other movies, I'd still be arguing about Avatar. It's not that it doesn't bug me but I think people need to realize that Hollywood rarely has original ideas unless they steal or adapt it from something or another. In fact my favorite film of all time Shaun of the Dead rips off pretty much every zombie movie ever made. But I still love it. Anyway I thought I'd get that out of the way so I never have to bring it up again.
Repo Men is the story of Remy (Jude Law) who works for the Union. His job is simple: if you are having problems with a body part and need a replacement the Union will give you a new artificial limb and/or organ. They usually tend to cost a lot of money but people can make pretty good monthly plans. The problem is that if you can't pay and get past due they will send a repo man to get you. The repo man will shock you with their futuristic taser and then remove said limb/organ leaving you to die of blood loss. Remy's best friend and partner is Jake (Forrest Whittaker). Jake is a little less serious than Remy and is certainly much stronger than Remy making them a pretty good duo. One day however on a routine trip, Remy gets shocked and damages his heart. He gets an artificial heart put in by the Union and freaks out when his boss (Liev Schreiber) makes him pay for it. Now knowing he is past due, Remy must escape and find some way to keep himself from getting Repo'd
It's a good story for what its worth although it does have some serious tone problems. I personally thought the film was a comedy while my friend and podcast partner Nick thought it was a gory action drama. Well to be honest with you the film could be either. There is a LOT of gore and bloody action scenes (including one awesome homage to Oldboy) but then for every one of THOSE scenes there are three comedic scenes. The dialogue is usually always funny and very tongue in cheek, there are scenes that are really funny (like a little girl yelling "Yay" when she does surgery) and a soundtrack that is eye openingly out of place (Feeling Good? 50s music? Classical?). But I laughed more than I did cheer so I thought it was a comedy. The acting is decent but it seems like Forrest outdoes all of them. His character has the most depth in my opinion out of the rest of them. Law is good but mostly growls and monotones a good portion of his lines. Liev is good but he just plays himself in every movie so its hard to say that he can't play himself.
It's no award winner by any means, the tone issues, violence and somewhat weird twist ending could put some people off but I actually enjoyed it for what it was. A rip off yes and not as good as the Opera but still worth seeing in my opinion.
MY VERDICT: SEE IT
Posted by xTJMac510x at 1:17 PM