You dogs would be lucky to get a gig singing in the shower. Go sell girl scout cookies. 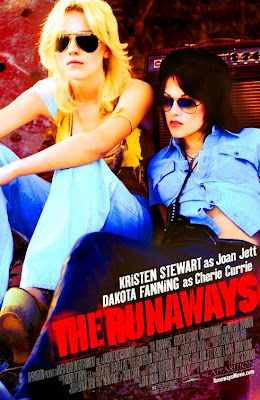 Hello I am the movie encyclopedia and if no one else will see it, I will.
The Thursday before last on my segment "Trailer Talk Thursday" featured on the LAMB site (Large Association of Movie Blogs) I talked about this movie. Little did I know that my indie theater would RELEASE this movie today and after coming back from the show I'm primed to review it. But before I do here is what I said about the film from Trailer Talk Thursday:
"If you know me then you know I love classic rock. 8 out of my top 10 favorite bands of all time are from the 80s or before. There is just something about that music that has changed from back in the day to now. Music used to be a lot more passionate and intense, rock stars weren't just glittered up pretty boys (Jonas Brothers) and the music was a lot better. There was a time when 'Sex, Drugs and Rock and Roll' was cool and people could experience great events like Woodstock back when it was great. And while there is still good music today, I think the best days are behind us.
Joan Jett is my favorite female singer of all time. Her ability to be a true female warrior who really doesn't give a crap what people think, even to this day, is amazing. Even now she is still as good live as she was years ago. But what some people, especially people in my era, don't know is that she used to be part of the first successful all-girl rock band known as The Runaways. Started up by Joan Jett and Cherie Currie and managed by Kim Fowley, these three proved that girls can really rock and stand toe to toe with the boys. Cherie Currie, years after the band broke up wrote her autobiography called Neon Angel. This would be the source material for the film version of The Runaways, which is directed by Floria Sigismondi and produced by Jett."
The plot follows the book's outline and focuses on the life of Currie as a young teenager, Jett's Bowie inspired desire to be in a rock band and Fowley's drill Sergeant approach to managing and his willingness to do anything and exploit anything to make money. It shows the origins, the rise and the eventual fall of The Runaways and how the band affected each member of the band's life. It's less of a biopic like people expected and more of an overview of the band. It never goes really too deep into the character and mostly focuses on Cherie, her life at home and the music itself. That's not exactly a huge problem for me but some of the best films based on music legends (Walk the Line and Ray) really have an in depth and deep look into ALL the aspects of their music and lives. This kind of makes the plot overall seem a bit shallow compared to the two previously mentioned films but for what it's worth the script is good and what IS there is well written.
The acting is where this film really shines and makes any other problem, like the script's depth, seem like nothing. Dakota Fanning is phenomenal as Currie, really getting into her head and into the persona of Currie and her singing voice is quite good as well. Some may worry about the over sexualization of Fanning but she is such a seasoned vet of film already that she knows what she can and can't do and part of what makes Fowley so devious is the fact that he wanted Currie to be a jailbait sex kitten. But it never felt uncomfortable which is what kind of worried me.
Kristin Stewart as Jett...wow. Stewart is on my radar as a great actress now. She's no Streep by any means but as far as I'm concerned she is up there with some of the best young actresses. Despite her real life problems: pot, cigarettes, dating life, her inability to stand up straight, her mumble and biting of lower lip, you never notice it in this movie. She IS Joan Jett. She shows that side of herself that we saw in Adventureland...the one that can act. If it wasn't for those Twilight films damning her acting career I think she could have the potential to be an Academy Award winner down the line. I was extremely impressed with Stewart. And Michael Shannon, Academy Award nominee for Revolutionary Road and a great character actor does wonderfully with Fowley as well making him totally unlikeable and likeable at the same time. A great cast overall.
So despite it's lack of depth and weak plot, the film makes up for it with a great cast that brings this film to life. Maybe not the biopic we all expected but still a good movie.
MY VERDICT: SEE IT
Posted by xTJMac510x at 5:17 PM