Too many dudes trying to be Kobe Bryant up in this piece! 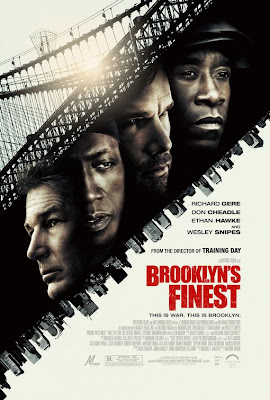 Hello I am the movie encyclopedia and if no one else will see it, I will.
Training Day is one of my favorite films of all time and definitely my favorite Denzel Washington film of all time. Shooter is my favorite Mark Wahlberg film. Needless to say, whenever Antoine Fuqua makes a movie, I am damned determined to see it. His gritty realism, sharp dialogue and unwillingness to let up or twist what you thought would happen make his films brilliant and very interesting to watch. His newest film, Brooklyn's Finest, may not be his best film of all time but it certainly was an entertaining ride from start to finish.
*Warning may contain MILD spoilers (like the first ten minutes nothing else)-
This film really doesn't want to pull any punches. The film starts with Sal, a narcotics officer with the New York Police Department, talking with Carlo, a drug CI about Carlo's recent brush with the law. Carlo finishes his story only to get a bullet in the face from Sal. Sal grabs Carlo's money and runs off. And from there the film takes off, showing that this film isn't afraid to show the dirtier sides of cops and that this film pulls no punches with violence.
The main plot follows three police officers, each with very different stories. Richard Gere is Eddie: a down on his luck cop who hates his life and is counting down the days until he retires and can finally off himself. Ethan Hawke is the aforementioned Sal, a narc cop with 5 kids and twins on the way living in a small house in suburbia. He is depressed, greedy and wants nothing more than to buy a new house for his family so they can be happy, even if it means breaking the law. And Don Cheadle is Tango, an undercover agent who has been undercover so long that he doesn't really know what's real anymore. His last assignment is to bring down his best friend Caz (Wesley Snipes) but Tango is apprehensive about doing that.
The story blends well together and bounces from character to character pretty smoothly. There are even points in the story when the characters bump into each other and the camera will then pan over and switch to that other character. It's seamless editing and it really works. The action, when its there, is pretty intense and like I said, is realistic, bloody and pulls no punches. HOLES get blown in people and lots of blood will POUR out. That being said there could've been a little more action and a little less exposition.
My main complaint with the entire movie and probably what keeps it from being great is two things: First, the representation of cops is just ridiculous. Even if you HATE police officers you will agree that Antoine went a little far. Police officers will shoot unarmed civilians, steal drug money, bang hookers, lie, cheat, steal, and do about everything to make them totally unlikeable. Did Antoine get too many parking tickets? There is even one comment that made me really pissed off: A police officer called a black person a monkey and said that he shouldn't have sent people into the jungle to clean up monkey shit. Now I'm white but that's almost going too far. I know a lot of cops and those words would NEVER come out of their mouths. The second main issue is the ending. I won't give it away but it's frustrating and really is hard to watch because you end up thinking "Well what the hell was really accomplished?" And it's strange too because this film is really formulaic until the end and then Antoine just throws a wrench in it. Kudos for changing things up but REALLY?
All in all though, Brooklyn's Finest is an enjoyable drama with some good action and great acting. If you like cop dramas then give this one a look.
MY VERDICT: SEE IT
Posted by xTJMac510x at 2:44 PM