I love it when a plan comes together. 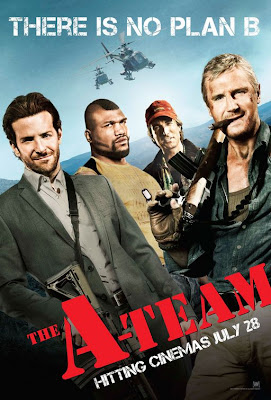 Hello I am the movie encyclopedia and if no one else will see it, I will.
In a previous LAMBcast and to pretty much all my friends and family I have said that this was my most anticipated film of the year. Yeah Shutter Island, The Wolfman and Scott Pilgrim were on there (mind you this was back in January and before I read Scott Pilgrim) but for some reason the A-Team just stood out as my favorite. For one it was directed by Joe Carnahan, director of NARC and the original Smoking Aces. Now I may be in the minority but I loved NARC and Smoking Aces. Tongue in cheek humor, balls out action, great cinematography and a joyride from start to finish. You add that to one of my favorite TV shows of all time "The A-Team", add in even more action, have it produced by the Scott Brothers (Ridley and Tony) and starring some pretty good actors and you have the recipe for a great film. Well they delivered on all cylinders and while it may not have a whole lot of brain, it makes up for it in action. 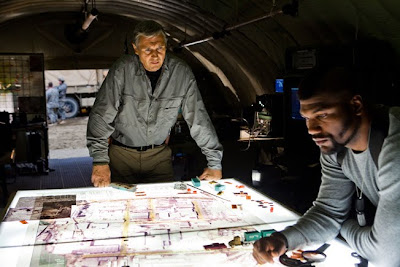 The story follows Col. Hannibal Smith (Liam Neeson), a cigar chomping military man whose great at making crazy ideas and plans come together. He bands together with another military man, a master of disguise named Templeton "Face" Peck (Bradley Cooper), a dishonorably discharged Army Ranger Bosco "B.A." Baracus (UFC fighter Quentin "Rampage" Jackson) and a clinically insane pilot named H.M. Murdoch (District 9's Sharlto Copley). Together they created the A-Team and they solved most of the military's problems themselves. They may not be the youngest but they are the best. 8 years after their first mission they are approached by two people: a former flame of Face's Charrisa (Jessica Biel) who works as an MP, and CIA agent Lynch (Patrick Wilson), who approaches them about getting some counterfeit plates. Needless to say things go wrong and the A-Team is blamed. They all go to jail but Lynch breaks Hannibal out and asks him to get the plates. 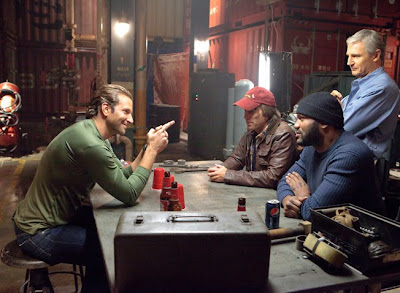 This film is brilliant from start to finish. So instead of starting with the positives I will just describe the negatives: Rampage isn't a trained actor and it shows, there are plenty of moments in the film that defy logic and are a bit headscratching, there are more talking scenes then there are action scenes, the film is two hours, the action is a bit hectic when it comes to the camerawork, the scenes can overstay their welcome, Bradley Cooper has a weird smile, and I can't decide if it's a comedy or if it's trying to be serious...
...all that doesn't matter though. This film was one of the best experiences I've had in a long time. It literally had me on the edge of my sight, yelling out Holy Crap and Oh My God on a few instances, and most importantly it is a truly amazing re imagining of my favorite TV series. Liam Neeson is amazing as always proving just how good of an actor he is, Cooper and Copely are the same with Copely stealing the show and Rampage tries his hardest to be the best B.A. he can be. This film also has longevity in my opinion. I have seen it three times already and it is still as breathtaking as the first time I saw it.
If you are willing to leave your brain at the door and not ask any questions and just enjoy an action film for what it is: entertainment, then you will find this to be one of the best films of the year. A true action masterpiece and a great summer film.
MY VERDICT: TOP FILM
Posted by xTJMac510x at 7:06 PM