Hello I am the movie encyclopedia and if no one else will see it, I will.
Today was an interesting day. "Favorite TV cast." It was interesting because I have written and re-written this article with different shows all with really convincing reasons why they have the best cast. I did one on Battlestar Galactica, Firefly, Arrested Development, Lost, Star Trek, The Wire, House, The Office, E.R, Mad Men, Breaking Bad, The Sopranos and many many more. All of them deserve to be up there and all of them are my favorite. But after a lot of consideration (and an eventual coin toss) I picked one. One that doesn't sit well with a few of my readers I'm sure but anybody who watches the show will understand why I chose this show as my favorite cast: 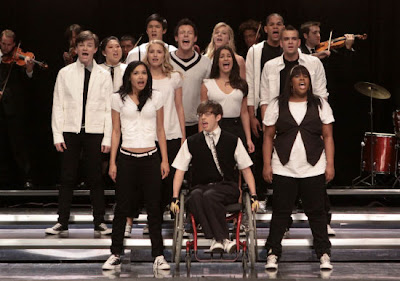 Glee-
If you want to talk about a very good cast who are also quite musically and rhythmically talented look no further than Glee. Each character is a stereotype that we've all seen: the perfectionist, the diva, the jock, the airhead, the geek, the cheerleader, the slut, the handicapped, the bully, the quiet one, the token gay and of course the token black. Each character stereotype has been seen in television for years but this coming together of all of them into one group is great. It also helps that while they are stereotypes, they all have distinct character traits that make them unique and they all go through an arc of some sort and grow as a person (well maybe not Brittney but she is so damn funny).
Add in Matthew Morrison who is a great actor as well as Jane Lynch, a comedienne unlike any other and you got yourself a great cast who is both funny and touching. For a better example here is a touching scene-

and a funny compilation-