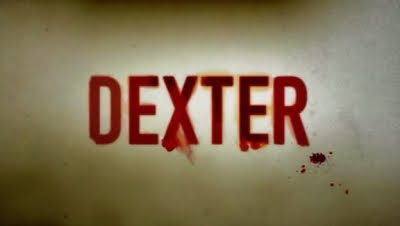 Hello I am the movie encyclopedia and if no one else will see it, I will.
In yesterday's MEME I told you all that Twin Peaks is my favorite show of all time. That is true. But a show that is close or pretty much tied with Twin Peaks is a show called Dexter. I figured since I will be talking about Dexter almost as much as I talk about Twin Peaks in this ongoing meme that I'd give Peaks it's own spotlight and not spoil it by putting "And Dexter" to the end of it. Twin Peaks is undoubtedly my favorite show of all time, but Dexter is my modern favorite.
So that's why when I saw today's topic I decided to do BOTH Twin Peaks and Dexter, especially since I have been wanting to talk about this certain episode of Dexter for a while. And today's topic is...

Favorite Episode of your Favorite Show: 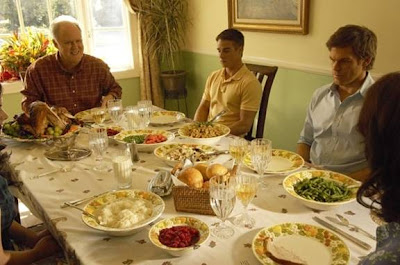 Dexter-Hungry Man (Season 4 Episode 9)
If you ever doubted Dexter as a good show or thought that the show was lacking after Season 2 (especially considering the lackluster Season 3) in came Season 4 and The Trinity Killer. John Lithgow was already scary as hell to me so to see him as a serial killer was even more frightening. From his first scene all the way down to his final scene he stole the show. He mixed humor with genuine scares and chills that I won't soon forget. He was the Luthor to Dexter's Superman, the Joker to his Batman, the arch nemisis that grabbed a hold of Dexter and wouldn't let go.
By episode 9 Dexter had already established the identity of the Trinity Killer. He was deadset on taking him out once and for all but after noticing he had a loving family, a good life, and his life and urges seemingly in order for the most part he decided to become an "apprentice" to Arthur (Trinity's real name) under the pseudonym Kyle. They built houses together, went wood chopping and hung out together. So much so that Kyle got invited to Thanksgiving Dinner.
Dexter was already dealing with a lot of stress at home, mainly his wife and kids and, on top of it all, he was supposed to host Thanksgiving at his house. So in a delicate balancing act Dexter decided to be Kyle first and Dexter second.
When he gets to the house though is when things start going bad. The daughter is promiscuous and always locked in her room, the son is defiant and therefore gets his finger broken when Kyle isn't there, and the wife is deathly afraid of him. That kind outside Dexter saw was really a facade.
When they finally sit down this scene occurs:
This scene is one of the most powerful, intense, frightening and brilliant scenes in television history. In fact I think this is the GREATEST SCENE IN TELEVISION HISTORY.
That's right...the best scene ever. It's this scene that proves Dexter is one of, if not the best, show ever. And if you ever doubted the shows ability to deliver well this is a giant middle finger to you. 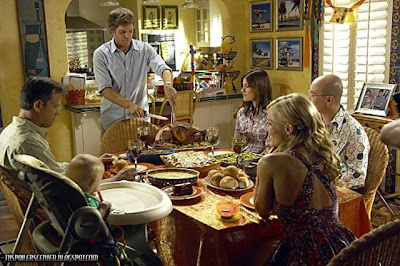 The rest of the episode is good and the dinner at Dexter's house is both sweet and fun to watch. But yeah that's about it...now moving onto my favorite episode of Twin Peaks... 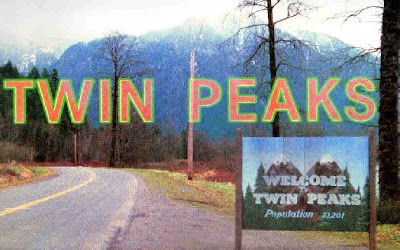 Twin Peaks-Pilot
It was really hard to pick an episode of Twin Peaks I didn't love. Sure there were some filler moments (very few but still there) and the series finale was a bit discouraging but overall from beginning to end this series has been brilliant. But how could I go wrong with picking the full length original pilot (aka the one on the DVD aka the original as Lynch intended it) 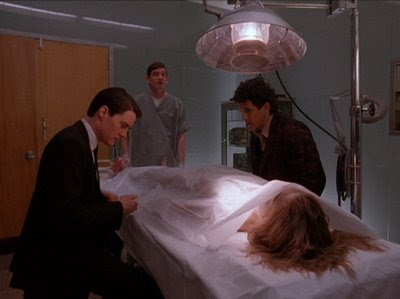 From the very haunting beginning title to the discovery of the body, this episode sets a precedent for what's to come. The kooky themes, the dark lighting, the brilliant writing, the eerie soundtrack, it's all there and it's set up perfectly. A wonderful start to a wonderful series.
The basic idea of the episode is what I mentioned in the previous post. It sets up the events for the series
Posted by xTJMac510x at 1:58 AM