What is the difference between a duck? 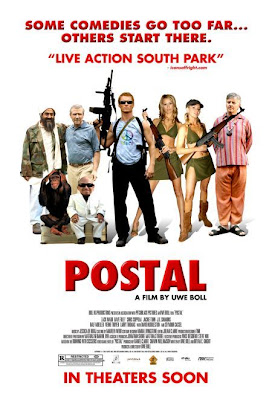 Hello I am the movie encyclopedia and if no one else will see it, I will.
Before getting into the review I have a message from General Patton telling us what he thinks about this movie:

Thank you General but I have to disagree with you. While Postal may not be a great movie, it's enjoyable, it's funny, it's laughably bad in places and it's got a few scenes which really make me die laughing. If you want to talk about S**T, then let's talk about Indiana Jones 4 (I went THERE!) If you couldn't tell that is Uwe Boll himself, who went on a marketing campaign spree with this film, dressing up as George Patton and talking about Postal, problems in the world, hookers, Starbucks toilet paper and much more. It's actually quite clever and it just proves my thoughts that no matter how bad of a director you think he is, he is actually a pretty awesome guy. Need more proof? Read my interview with him or listen to his commentaries.
Anyway I'm reviewing Postal. Shot back to back with Seed, Postal is based on the extremely violent and controversial PC game that is hectic, hilarious and awesome. And unlike Boll's other game adaptations, Postal stays very true to the source material it's based on and captures the spirit of the game in film form. Is it Citizen Kane? No. Is it the funniest thing ever? No. But is it enjoyable? Yes. 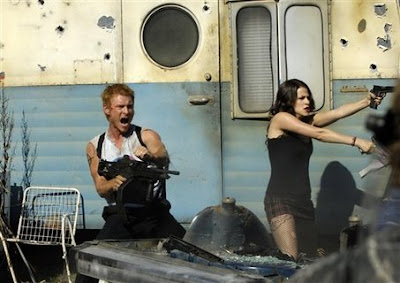 The "plot" of Postal follows the Dude (Zack Ward). He's mocked at a job interview, kicked out of unemployment and his wife, whose really fat, is cheating on him with pretty much any and everybody with a pulse. He finally just loses it and decides that he needs to get out of town ASAP and get enough money to make it on his own. So he teams up with his Uncle, (Dave Foley) a doomsday cult leader, to steal a bunch of rare dolls and sell them for a lot of money. While all this is happening, Osama Bin Laden, whose been in the same town as the Dude since 9/11 (thanks to help from his best friend George W Bush), wants to get the same shipment but instead of selling it he wants to inject it with Bird Flu and give it to kids.
So Al-Qaeda and the Dude/Cultists go to where the shipment is being sent to: a nazi theme park run by Uwe Boll. Things seem okay until Vince Desiderio, the game creator, attacks Boll and all hell breaks loose.

Needless to say the rest of the film is silly jokes, gunshots and explosions mixed with scenes of nothing.
Postal isn't the best written film. It has some pacing issues, most of the actually funny jokes happen early on with the rest being unintentional (so bad its funny) and the action is pretty tame until the aforementioned hell breaking loose scene. But it DOES work for the most part. I never was bored watching this film and I did get some good chuckles out of it. The acting was pretty good overall considering except for Chris Coppola, who was pretty annoying and really over the top. Everyone else was pretty good and it was nice to see Dave Foley. 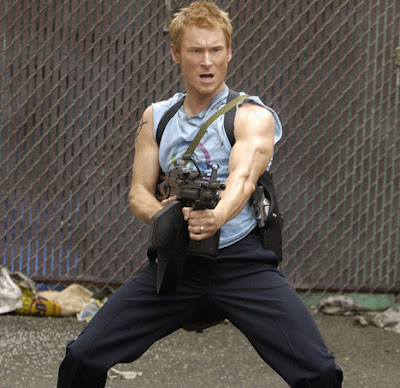 Postal is a hard film to rate. It's not the best film technically or writing wise but it's entertaining, enjoyable and it gets a chuckle out of me. The best way to describe it is the live action version of the sub-par seasons of South Park: enjoyable, funny, goofy, somewhat violent, but not the best by any means. I've watched it a few times now and I still get a kick out of it. If you like silly comedies, want to be mildly entertained or enjoy the video game then you will like this film.
If anything else you see Uwe Boll shot dead. I know a lot of people want to see that.
MY VERDICT: RENT IT
Posted by xTJMac510x at 6:47 PM