On the Fourth of July, the United States of America will know HELL! 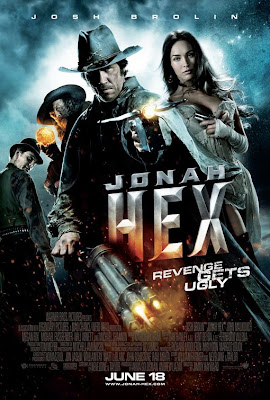 Hello I am the movie encyclopedia and if no one else will see it, I will.
What do you get when you mix an obscure DC comic, rip out all the good parts, put in a decent cast, add Megan Fox, get rid of the gore but keep the explosions, add amazing special effects, a short running time and an underwhelming feeling of meh? You get the bitter and grainy smoothie known as Jonah Hex.
Before getting into the movie let me give you a little back story on Mr. Hex. Jonah Hex first popped up in 1971 in All Star Western #10 and Batman #237. He wasn't really a character more than a full ad with a few panels of dialogue. Jonah later made his debut in Volume 2 of All Star Western #10. Jonah dominated the All Star Western series up until #38 upon which Jonah got his own comic series that lasted 92 issues. He was cancelled in 1985 but returned later in a series called Hex, which moved him to a post apocalyptic world. Since then he has been popping up randomly on the DC radar, with new issues or graphic novels coming every couple years or so. 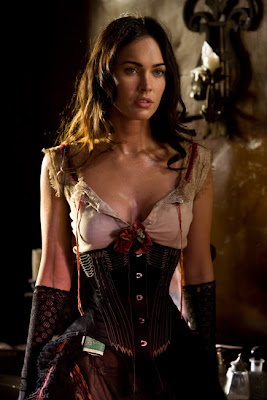 Well in 2000, Fox got the rights to develop a one hour film based on the character but that was quickly scrapped until 2007 when Warner Bros. Pictures bought the rights to the character and subsequently a film adaptation. The original people behind the one hour special stepped in to produce and oversee things with the directing duo of Brian Taylor and Mark Neveldine (of Crank and Gamer fame) set to write and direct the film. In 2008, despite Tom Jane practically begging for the role, Taylor and Neveldine cast No Country for Old Men's Josh Brolin as the main character. Later that year Taylor and Neveldine stepped down as directors but left their screenplay as is. Warner Bros. searched high and low for directors and eventually settled on Jimmy Hayward, an animator who worked on Reboot as well as many Pixar films who made his directorial debut with the film Horton Hears a Who.
Eventually they hired the rest of the actors and all throughout 2009 they shot, re shot, and re shot again the film until it was finally finished and edited and sent for distribution. Now the film has arrived and boy howdy is it a mess. 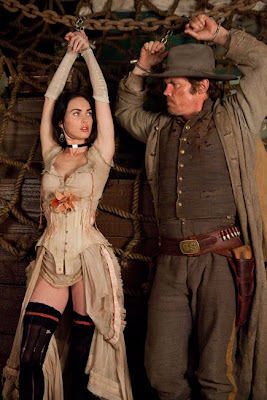 I'll get into the plot in a second, or whatever you want to call it, but first I want to address one major gripe: did the studio drop this film on the way to Warner Bros? This isn't a joke but a serious question. It's like the editor had chopped the film up piece by piece and put it in the can and let Warner Bros decide what to do. That person must have dropped the film and film spewed everywhere, leaving him to put random things in and go off. I say that because this is a 70 MINUTE FILM! And it's pretty obvious by the end of it that a LOT of things are missing. I have a feeling the DVD will be twice as long as the theatrical cut. I think this is partially due to the PG-13 rating but my theory still stands.
Basically though the plot is Jonah Hex is a Civil War soldier whose family is killed and is left scarred by his arch rival Quentin Turnbull. Jonah then gets supernatural abilities to bring people to life for short periods of time as well as having "one foot in Hell at all times." He also has a bunch of tricked out weapons and whose only friend is a prostitute named Lilah. Quentin returns claiming that he will H-Bomb (or some kind of weapon to that effect) DC and that Hex is the only one who can save the day. 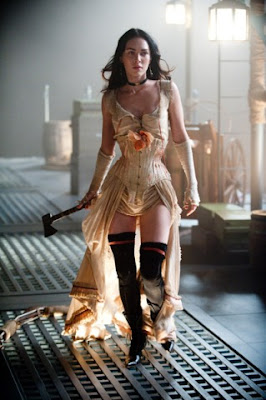 That plot would seem decent but this film has very little explanation for anything. Motives, how people got what (weapons, money, supernatural abilities) and basic characteristic exposition is totally missing from this film. Why do we care about Lilah? Why does Jonah? Why do we care about Jonah? None of that is answered. His family's death is very brief and you never see him with them before the attack, just after. You are given no reason to care about any of the characters and the motives and reasonings behind them all are skewed and totally head scratching. On top of that, you are given no breathing room due to the abnormally short running time.
Besides a total plot fail, this film does okay otherwise. The effects are really good and the explosions are definitely pretty. The facial makeup looks good and the backgrounds, scenery and costumes all look really good and authentic. The actors sans one are also pretty good. Brolin does a good Hex and is a believable badass. He mumbles a lot and almost has a Boomhauer voice mixed with Ron Pearlman snarl but you can see that he is trying really hard to save this film. So are all the other supporting cast members like the misplaced Will Arnett, Jeffery Dean Morgan, Wes Bentley, Michael Shannon, Michael Fassbender and Tom Wopat. They all try really hard and for the most part they are all pretty good.

The one major acting blemish is of course Megan Fox. Her Southern accent is laughable, she has no stage presence, she is extremely wooden, has no talent and is basically there for eye candy. She really brings down this otherwise good cast. To her credit you can tell she is trying but that's like telling a one legged dog to run.
The plot is non existent, full of holes and head scratching issues, the dialogue is terrible and Megan Fox can't act. The other actors and the effects are pretty but that can't really save this film. It's not an abomination to cinema but this is a very hard film to recommend.
MY VERDICT: AVOID IT
PS: Yes I purposefully only put pictures of Megan Fox. She's the reason a good 90% of people are seeing this. So I just saved you money...you're welcome.
Posted by xTJMac510x at 12:55 AM