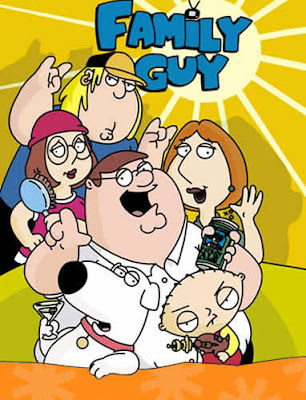 Hello I am the movie encyclopedia and if no one else will see it, I will.
Today was probably the easiest day for me: "An episode you've watched at least 5 times." Well despite all the great and not so great shows I've listed in the past already, I do find it hard to watch something twice let alone five times. That's why Adult Swim is so great. Their shows are usually ten-thirteen minutes and their other ones are 22 minutes without commercials. Now why do I saw Adult Swim and not any other network? Well at night that is pretty much the only channel that is on. I'm 19 dammit, I'm their target demographic.
Either way, an episode of Family Guy popped on the other day. This was back when Family Guy had gotten it's legs but was still looking for new ways to innovate. This was also before the show went south. In my opinion it hasn't jumped the shark yet (unlike another 20+ yr old cartoon) but it needs more quality writing. There are glimpses of hope yet though.
The episode that was on was actually my favorite episode of Family Guy ever. And before you comment saying "What about this one" don't. This has been and always will be my favorite episode. I first saw it back on a DVD pack of 7 called the "Freakin Sweet Collection" and since then I still quote it to this day. What is this episode?
To Love and Die in Dixie 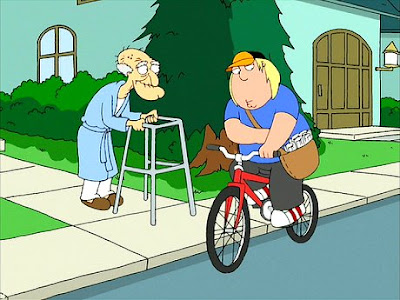 The episode starts off with Chris getting invited to a party by a girl he has a crush on. He's interested in getting her a gift but instead of getting the money from his parents, he decides to get a job. It's there he meets the greatest character in the history of Family Guy: Herbert The Pervert.

If you watch that and don't laugh I'm so sad for you. Either way, Chris gets the gift for the girl, screws up and leaves the party dejected. The next day he goes to a convenience store where he witnesses a hold-up and his bike gets stolen. Peter accidently gives all of Chris' information to the robber and thusly Chris and the family have to join the witness protection agency.

Things are obviously different then back in city life since they have an outhouse, killer raccoons, a closeted Jeff Foxworthy and simple country folk. But they make due and eventually Peter buys a replica Dukes of Hazzard car and after driving a hole into the house, that maybe he should get a job. But he sucks with jobs as witnessed in a flashback

But eventually he finds a job as a sheriff and things seem to be great. Chris meets an awesome friend, Stewie joins a band, Meg is popular and Peter and Brian are happy as sheriff. 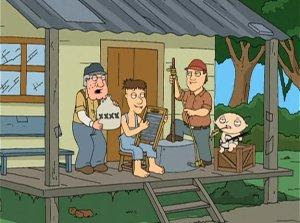 But things start to make a turn for the worse when the robber gets their location from the FBI and Peter and Brian piss off the whole town during an inaccurate Civil War reenactment. It's there he utters my getaway line "Look a newly married interracial gay couple burning the American Flag (it works)." They escape and Chris learns that his friend was actually a girl. 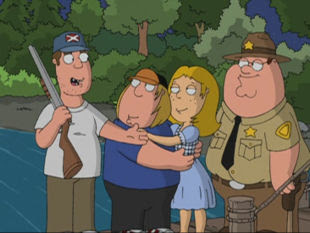 Things come to a close at the local town dance when Chris and Sam decide to go to the lake. The robber shows up but is promptly shot by Sam's father. Peter and his family are forgiven and head back home...but not without some nice voicemails from Herbert
Yeah that is the perfect end to a great episode and that call me makes me laugh every time.
I love this episode and I will watch it five more times if I have to. A true comical masterpiece.
Posted by xTJMac510x at 8:16 AM