Hello I am the movie encyclopedia and if no one else will see it, I will.
Today's entry into the TV meme was set in stone even before I committed to this meme. "A Show you will re-watch." For me it was an obvious choice picking Doctor Who. Not only is it the longest running science fiction television show in history but one of the longest running shows period. I was a bit of a loser and got into Doctor Who around the Ninth Incarnation of the Doctor but since then I have tried to watch as many older episodes as possible. But that's why this was such an easy choice. Not only is it a great series but it's a series with a long and rich past that's worth revisiting. 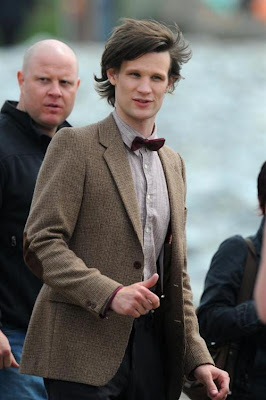 I will say this though. I never got BBC America until earlier this year. So for the most part I had to wait until DVD or till it was on Youtube to watch most of the episodes I have seen. But now with the Eleventh Incarnation of the Doctor I can finally watch the show when it comes on. Yes I realize it's a week after the UK but still I'm really happy that I can watch it on my TV, in HD and live (for the most part). And let me get something off my chest right now:

I love Matt Smith as the Eleventh Doctor. I don't care what anyone says I think he is great. I mean for someone with not a whole lot of experience and being so young (the youngest Doctor to date) taking on such a huge role, he's doing great. He may not be David Tennant (my favorite as well as a lot of other people's) but I really like him. He has a great personality, he's got a great voice, great comedic timing, and when he wants to be serious and dramatic he is also really good at that as well. And I really hope they keep him around for a while.
Anyway I can't wait to re-watch Doctor Who from the beginning and I can't wait to see more from the Doctor.
Posted by xTJMac510x at 12:24 AM