Hello I am the movie encyclopedia and if no one else will see it, I will.
Today's entry into the meme is a controversial one because a lot of people hate the show I picked for it..."Current Show Obsession." Well for me I had to think long and hard but eventually after realizing I was watching a marathon of it on Spike I went with Deadliest Warrior.
Now before we go on let me save you some comment space. Yes I realize the show is pretty much fixed. Yes I realize the doctor is there for no reason other than to say that the guy is dead. Yes I realize that the computer data is BS. I realize that the writing is cheesy. I realize that fundamentally it fails as an educational or scientific show and yes I realize that there is a game version of this coming out. So if your hate towards me for picking this involves one of the above than save your fingers. 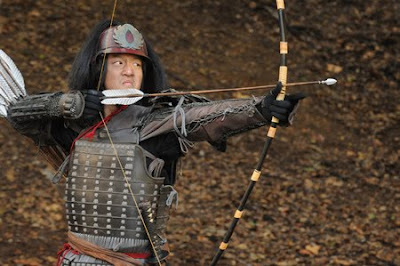 Now that that's outta the way let's get on with it. Deadliest Warrior is a Spike TV show where a group of three guys: an ER doctor, a tech nerd and computer wiz, and a beefcake who is good with motion sensors and using weapons, have come together to settle age old scores that we've dreamed about for ages. Who would win in a fight? A Samurai or a Spartan? An Apache or a Knight? CIA or KGB? The list goes on and on mixing modern day and past warriors together to create a greatly varied show.
But how do they settle the score? Well they bring in representatives from both sides, usually someone who studied in the fighting style or knew/is descended from the warrior class, let them bring whatever weapons they think would be most useful in a fight to the death, and test them out. They break it down into close range, mid range, long range and special weapons and each person gets a chance to test out the weapon in different scenarios. By the end of the round a winner is chosen and they move on. This data, along with speed, timing ect are all put into a computer program which then simulates a fight.
This is the best part of the show and I know a lot of people agree with me. The fights are always well choreographed, highly unpredictable and have a good flow to them. And at the end a winner is chosen and they are deadliest. 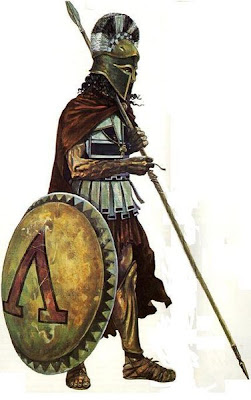 Besides the simulation what makes this show great is three things: the weapons, the carnage and David Wenham.
The weapons are, for the most part, all extremely cool. And they are all pretty dangerous. So when you see an ax chop off a ballistics head or a guy harpooning a pig carcass it's pretty badass.
The carnage goes hand in hand with it. The deadliest weapons are so devastating that blood and guts get everywhere. It's like watching an action movie for an hour. On top of that they always do slo-mo instant replay which adds to the carnage.
And David Wenham is brilliant. The credits don't say it's him and it's not listed under his IMDB but it is him. It has to be. Anyone who has seen the show can't argue that it IS the same person. I mean listen:

Can you hear it?

Either way I love this show and I can't wait for the next episode.
Posted by xTJMac510x at 12:58 AM