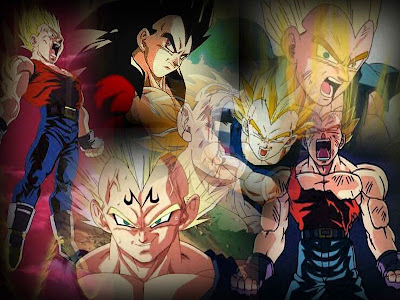 Hello I am the movie encyclopedia and if no one else will see it, I will.
This was actually a really tough day for me. There are so many strong male characters in television that reek of awesomeness that it is really hard to choose my favorite. To be honest it was between Jack Bauer and Dexter Morgan for the longest time. Both of them have had huge badass moments and both are truly awesome characters to watch. Who can forget this scene from Dexter Season 2?

and do I have to remind anybody that Jack Bauer is a total badass?

Either way, both men deserve to be at the top of my list. But I decided against that because both men are probably going to be regulars on a few people's lists. So I went with an oddball choice, but still a good choice because not only is he badass...he blew himself up to save the world and his family. That person? Vegeta from Dragon Ball Z. 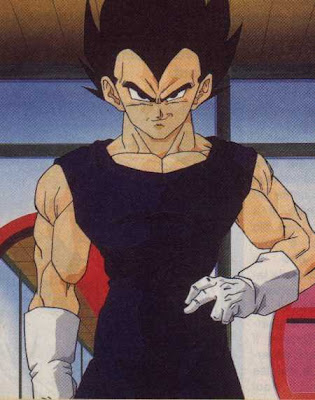 Vegeta has always been one of my favorite characters growing up. When you first see him he is a scrawny but powerful prince of a destroyed planet with a thirst for blood. After getting almost killed by Goku and friends he flees to the planet Namek. Once there he is still an evil, cynical bastard but he's changed slightly. He still has a deep rooted hatred for humanity but he's willing to work with Goku and crew to stop the greater evil. Eventually that leads to Vegeta turning semi-good. And that lasts all the way through the Buu saga. He never stops being an evil, cynical bastard who is an extremely deadly force to be reckoned with, but he actually learns to care about others and even how to love...even if he won't say it.
But he does say it, not with words but with an action. When I think of DBZ I always think of one scene that shows the show to be amazing, and that is the sacrifice of Vegeta in the Buu saga. He admits he never showed affection for his son but that he was always proud of him. A few minutes later, to try and stop Buu from destroying Earth, Vegeta blows himself up, taking Buu with him. It's an emotionally powerful scene and has always been one of my favorite scenes of all time.

So Vegeta is my pick for favorite Male Character.
Posted by xTJMac510x at 5:21 PM