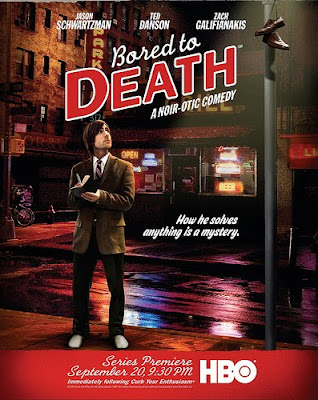 Hello I am the movie encyclopedia and if no one else will see it, I will.
Well it's Day 2 (technically Day 1 but hey thanks to the works of modern day technology I can make this Day 2) of the TV Show Meme and now were moving onto a question I had some trouble with:
A Show that You Wish More People Were Watching:
This was a hard one for me for many reasons. First off how can I decipher whether a show is watched by many or by few? I mean if it's a reality show like American Idol or America's Got Talent than it's pretty obvious it's watched by a lot of people but really it's hard to decipher. I mean what about Showtime's shows? I know Dexter is watched by many now but what about Weeds or Nurse Jackie? And the same goes for HBO. A good number of their shows are watched by a lot of people but that a lot of people is small compared to a show like Glee. Unless your True Blood or Entourage you aren't that widely known. Then I wanted to go to Starz but then I realized that even I don't watch any Starz besides Party Down and Spartacus and those are watched by tons of people.
So really I had to flip a coin between two shows and since one will be on another entry I decided to go with this... 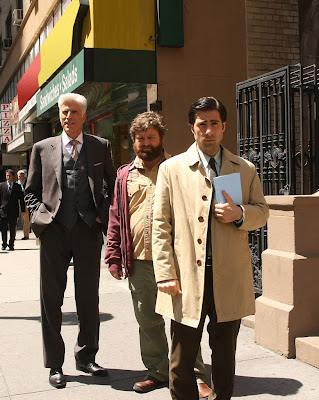 Bored to Death
A show that was on the brink of cancellation but due to Curb Your Enthusiasm's Seinfield episode was renewed for another season, Bored to Death is one of the most refreshing and original comedies I've seen in a long time.
Created, written and based on the works of Jonathan Ames, this show follows the life of a struggling novelist named Jonathan Ames (Jason Schwartzman) who hasn't really done a whole lot. He is a thirty year old alcoholic stoner whose life is slowly falling apart. His girlfriend is threatening to leave, his editor is on his back, his boss is crazy and his best friend is a bit weird. So one day he writes up an announcement in the paper that he is an unlicensed Private Investigator for hire. From there the show takes Ames on adventures in which he must solve crimes, write his novel, work on his relationship and stop his boss or his best friend from doing stupid things.
Probably what makes this show work are three things: it's quirkiness, it's writing, and it's actors.
There are three main characters: Jonathan (Schwartzman), Ray (Zach Galifianakis) and George (Ted Danson). Ray is the best friend. He is a comic book artist and sperm donor to two lesbians and has a semi stable relationship. He is innocent in almost everything he does (think Alan from the Hangover) but tries hard to help his buddy. George on the other hand is Jonathan's boss. He is a magazine editor who gets crazy schemes and ideas in his head which can easily backfire on himself and Jonathan. They all work together well as a crazy three's company and they work also as stark contrasts of each other which provides great banter.
The writing is smart, funny and it really works well. It mixes the quirkiness, the originality and the humor in a way that you don't see with other shows.
Luckily the DVD is coming out in September, in time for season 2 to pop up so be sure to give that a look and trust me when I say this is a great show that more people should watch.
Posted by xTJMac510x at 11:22 PM