Simon says lets get the hell out of here and let the cops ask questions later while we're kicking it back in Seattle selling our story to the Enquire. 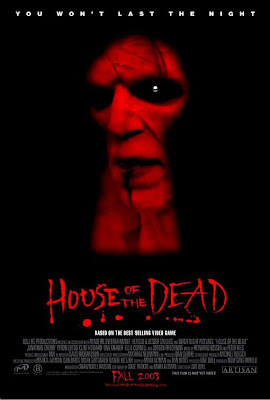 Hello I am the movie encyclopedia and if no one else will see it, I will.
The next two in my Uwe Boll series are an interesting pair. They are considered to be Uwe Boll's worst movies ever and on top of that some of the worst movies ever. The interesting thing though is that about a year after both films came out, Uwe Boll released a Director's Cut of them that dramatically altered the film. For one it made the film a lot better, for the other it made it worse. This is the latter. Granted the original is not much good but the new version which I'll get to is much MUCH worse.
I will say before we go on in Boll's defense...he didn't write this film and he had nothing to do with how the film went. He was just the guy behind the camera. Just saying. 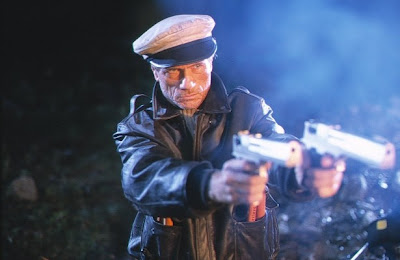 The story of House of the Dead is loosely based on the classic arcade shooter. And when I say based I mean there is a house, there is zombies and they are dead. Besides that and a few shots of the video game interwoven into the film itself it has nothing to do with the series. Basically what happens is a group of kids decide to go to a rave on an island. There is a mysterious boat captain, a cop, a smuggler, and a bunch of whiny teens. They arrive on the island and find it abandoned. Apparently zombies attacked. And their boat is useless. So what do they do? Grab a bunch of guns and go slo-mo shooting for about ten or so minutes until there are a conveniently small number of them left. They hole up in a house and wait. When that becomes boring they decide that they must escape somehow through the tunnels underneath the house and that there is some scientific explanation for the zombies. More people die until there are two left and they face an immortal zombie swordfighter whom they fight and promptly kill. 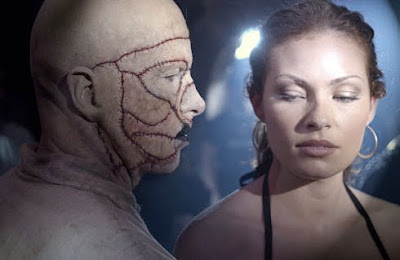 There's the plot. The plot is nonsensical, the dialogue is CHEESY as all Hell, the deaths are awkward to watch and not really that imaginative or interesting (ooh a bite...big whoop), some deaths are totally bafflingly stupid, the scientific explanation is BS and the acting is horrible across the board (except maybe Jurgen Prochnow).
But for all it's faults, House of the Dead is ALMOST a guilty pleasure. The action is SO over the top it's funny, the dialogue is so bad it's funny and every plot convenience and stupid moment and awkward death is so bad it's funny. So in a way it's so bad it's funny which makes it slightly tolerable. SLIGHTLY...
MY VERDICT: AVOID IT
But the reviews not over yet...apparently Uwe Boll heard that people liked this film as a guilty pleasure because it was so bad it was funny. Well being the businessman he is, he decided to release a NEW version of the film this time with more nudity, more hijinks, pop up commentary and lots of WOAH WACKY moments...that's right... 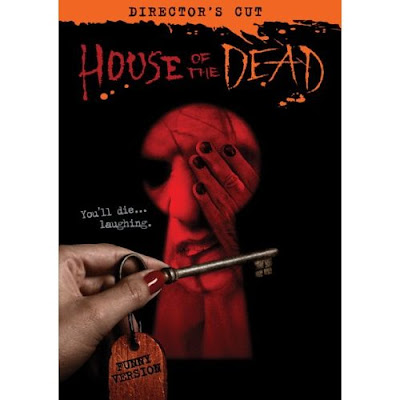 Yeah I wish this was an April Fools joke. No this is a real DVD and a real film. The pop up stuff is annoying and blocks a good portion of the screen, the naked scenes are awkward and borderline pornographic in a bad way and the wacky hijinks are really lame. LIKE IN ONE SCENE....GUNS...GUNS ARE REPLACED...BY WATER PISTOLS ROTFLOL!!!! HAHAHAHA
...yeah no. It's pathetic humor and it really makes this film so bad it's garbage. So what was once a guilty pleasure is now just a guilty film.
MY VERDICT: ABOMINATION TO CINEMA