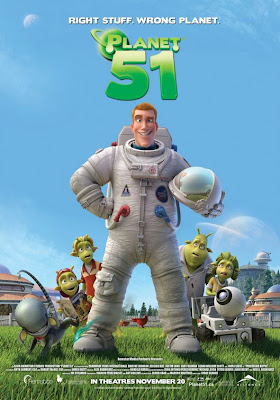 I love aliens. I love them in any shape, size, color or species. It doesn't matter if they are Alien/ID4 evil creatures or ET, they are just awesome to watch. Maybe its because I have always had an idea that aliens REALLY DO EXSIST. Yeah maybe they don't but you would think in a universe so huge that there would be life of some sort on another planet. And what would they really be like? Would they be the Hollywood ones we know or just micro organisms?Or could they be just like you and I but a little different? Well Dreamworks Animation decided to jump onto that idea but in a little more kid friendly way with their film Planet 51.

Planet 51 (aptly named since Planet 1-50 are trademarked) is the story of an alien planet inhabited by alien people. They walk, talk and act just like us...except during the 50s. The 50s and 60s were huge with alien films and this planet loves their alien movies. While most people buy into the idea that aliens really exsist one alien Lem (Justin Long) doesn't believe in aliens at all. As much as Skiff and Neera try (Seann William Scott and Jessica Biel) Lem wont believe. That is he doesn't believe till an alien space craft lands on his front porch. What comes out you might ask? Why an american astronaut thats what! Captain Charles "Chuck" Baker of NASA (Dwayne Johnson or The Rock) lands on what's supposed to be an uninhabitable planet only to realize its crawling with aliens. But whats surprising is that while he's freaking out, the whole planet is freaking out. Its a definite role reversal film. What if WE were the aliens. Its quite interesting.

Now mind you this IS a kids movie first and foremost. The film does plenty of the usual talking down and simplifying words stuff and it is quite short (By my clock 81 minutes) but I dunno I enjoyed it. I can definetly see why people would get bored with it and why people and critics dont like it but think about it in the mindset of a child. The animation is beautiful and colorful and the humor, albeit juvenile, is sometimes funny. Overall it IS a pretty well done kids movie. The pop culture references are abound and do provide some good laughs and nods to film buffs such as myself.

The cast does pretty well considering. Justin Long is fun to listen to and his dry delivery compliments the over the topness of many of the other characters. Seann William Scott is funny as the best friend and provides a good half of my laughs in the film. Scott has a knack for playing a good buddy. Biel is just kinda there...she has a total of like 15 lines maybe but she does well nevertheless. The three biggest standouts are Gary Oldman as the main antagonist, Dwayne Johnson as Chuck and John Cleese as Professor Kripple. Oldman is a great villain and has proved that in many movies. He plays his character quite well in this movie. Ive never been much of a fan as Johnson as an actor more so than as a wrestler but he actually does well for once in this movie. My favorite though is John Cleese. His parts are brief and placed sporadically but he always provides a good laugh and he is a joy to listen to. His voice is just brilliant.

Its a kids movie...if you like kids movies or got kids than you could do a lot worse. Its mildly entertaining to adults and its short so it doesnt take too much of your time. If you go in just as a teenager or adult thinking it will be a great Oscar film then you are wrong. It was made with kids in mind and I enjoyed it nevertheless.