Excuse me? Am I being flirted with by a psychotic rat? 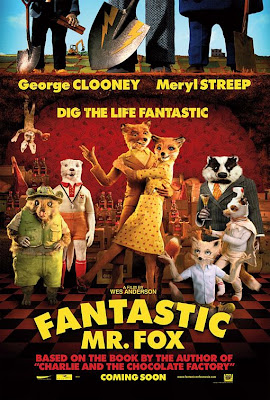 Ronald Dahl is one of my favorite writers of all time. Growing up reading Charlie and the Chocolate Factory, The Witches, Matilda and James and the Giant Peach I learned quickly that Dahl had a wonderful creative style that begged to be made into film. And Im not the only one who thinks that since all of these have been made or remade into movies. And for the most part (cough Charlie cough) of all them are phenominal kids movies that both kids AND adults can all enjoy. For some reason though I had never read or heard of Fantastic Mr. Fox before the movie and after reading the book I regret that. The book is wildly creative and really well done. So when I heard that George Clooney, Meryl Streep, Bill Murray and Willem Dafoe were all gonna star in it I was eccstatic!! Then I saw the director and all of that was dashed...

I know I am going to get a lot of flack for this but I have not liked a SINGLE Wes Anderson movie. For some reason they are either too artsy or too out there for me to truly enjoy. Granted The Darjeeling Limited (and its companion prequel Hotel Chevalier) was okay but I have not been able to enjoy any of his movies. Then I saw the animation and I was put off even more. Here see for yourself:

Though funny and well written the stop motion animation just seemed TOO weird for me. But then I sat down and watched the movie...

...WOW it was actually pretty damn good. The basic story of this movie is about a Fox (Clooney) and his wife (Streep) who have a pretty good life. One day however their neighbors Boggis, Bunce and Bean, three of the meanest buisnessmen in the world, started digging up their home. Not content with letting that stand Fox plans his revenge.

Fox has great writing. Dahl's influence is all over this film but at the same time there is an originality and true comedic wit to this movie. Although for children, there are plenty of laughs to be had and its just a fun movie to watch. Clooney is great playing the strong but sarcastic Fox and Streep can do no wrong. Although the writing is great, it definetly has to be the actors performances that really sell this film.

My only complaints are the deviations from the original story kind of change the meaning (pulling a Watchmen) and that's a bit disheartening to fans of the book. Also the animation is pretty funky. Its great and original but it will definetly turn some people off. But if you like stop motion animation then its fine. It actually does a good job improving on that technology. One other complaint I may have is there are a few parts that are really slow. I mean molasses slow. And its a kids movie too so it seems odd to have slow parts when kids have trouble sitting still for an hour and a half. But they ARE good scenes nevertheless but still they kinda slam the brakes on the momentum the film breaks.

Though not an award winner or the greatest animated movie of all time Fantastic Mr. Fox IS a good film. Its funny, adults can enjoy it, the actings great and its a feel good movie. Though the animation is weird and there are some molasses slow moments, I definetly reccomend seeing this one.