I'd say you're looking at a Boeski, a Jim Brown, a Miss Daisy, two Jethros and a Leon Spinks, not to mention the biggest Ella Fitzgerald ever 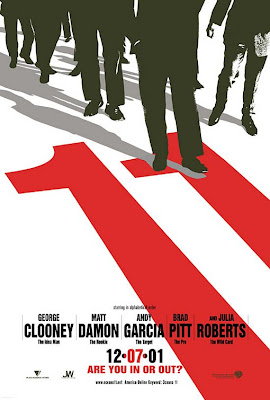 In 1960 the Rat Pack were the big wigs in Hollywood and in music. They were suave, cool as a cucumber, dressed in nice suits and all had voices that could make a woman melt. They could also act which made them a true force to be reckoned with. One of their movies, also one of my favorites, was called Oceans 11. Oceans 11 was a heist movie where the Rat Pack played a group of robbers who were going to rob a bunch of casinos all in one night. It was funny, it was full of action and it had the biggest celebrities in it.

So it was no surprise that in 2001 Steven Soderbergh, famous for his work with independant films and great work as a cinematographer and editor, decided to remake and revamp the classic film, but with the biggest actors they could find at the time. In the role that Frank Sinatra played of Danny Ocean was suave modern day Frankie George Clooney. Also on board was Brad Pitt, Matt Damon, Bernie Mac, Elliot Gould, Don Cheadle, Scott Caan, Casey Affleck, Carl Reiner, Shaobo Qin, and Eddie Jemison as the Oceans 11.

The plan was still the same: rob the three (in the original 5 but oh well) biggest hotels all owned by Terry Benedict (Andy Garcia) and get a huge chunk of cash. To do so they will need to do as many cons at one time as they can...all which were given codes (you can see it in the quote). Its a simple idea and story but its all in the execution.

The movie is pure fun. The jokes are quick, fresh and funny. The action is fun to watch and seeing all those great actors on screen all at once is something.