If you're gonna start the killing, you best start it right here. Make sure I'm all the way dead, because I'll come back and make you my b***h! 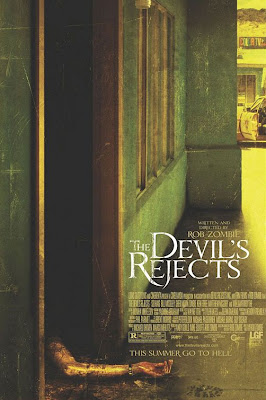 
Hello I am the movie encyclopedia and if no one else will see it, I will.


Every movie should end this way. I mean seriously what movie wouldn't benifit from having Freebird playing in the backround? Its very well done, artistic, truly a mindfreak (who is the good guy?) and the abrupt ending fits Rob Zombie's style so well that if I were to show you WHO Rob Zombie is as a director I would show you this clip.

In the two years after Zombie's first movie House of 1000 Corpses came out Zombie really grew as a director and its quite evident in Corpses sequel: the now cult classic Devil's Rejects. In Corpses, Zombie (real name Robert Cummings) implimented a Grindhouse/exploitation style of filmmaking incorporating over the top characters, an even more over the top story, bright colors, screen tear and serpia toned scenes, double takes and lots of insane blood and gore. It wasnt the best movie but it certainly had a great style and the Firefly family was extremly memorable. Well Zombie knew this and in two years he created the sequel to Corpses that showed what happened and the ultimate fate of the Firefly family. It gas a rock solid story full of great lines, great action, and the ultimate role reversal in the latter half of the movie. Its a brilliant film, thats the only way to say it.

Rejects takes place two years after Corpses and the police are raiding the farm. Only Baby and Otis are able to escape, with Mama Firefly being arrested. While Baby and Otis are on the run, Captain Spalding from the first movie is also on the run (its implied but Im guessing he is the Papa firefly). They all meet up at a motel where they keep a small group of musicians hostage. When that goes awry they spend the rest of the movie on the run from Sherrif Wydell, the brother of the sheriff from the first movie.

It plays out like a hybrid horror movie/action movie with comic elements abound. The memorable scenes and lines from the first are still there, with Spalding, Baby and Otis really shining, but gone is the Grindhouse feel. While it makes Rejects seem like a totally different movie, it works, showing that the family is evolved along with the director.

Its a wonderful film with great writing and the acting is fantastic. Sid Haig is still great as Spalding maybe even a little darker from before. He is still sarcastic and a little bit of a badass but he is still a little lovable I will say. Bill Moseley as Otis in Corpses was a Manson-esque crazed hillbilly. In this movie he is still Manson-esque but a lot more thoughtful and insightful and creative. He has definetly grown as a character. Sherri Moon Zombie is still great. She's hot, a whole lotta crazy, but her genuine performance is well done and really entertaining.

If you liked Corpses you will love Rejects and even if you have never seen Corpses, Rejects is one of the best movies ever made. Its entertaining, deep, thoughtful, well written and well acted, and has the best ending in film history.