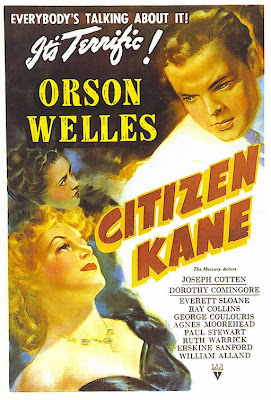 (This is taken from my paper I wrote ON citizen kane...it should act as a pretty good review)

Many film historians consider Orson Welles’s first and biggest picture “Citizen Kane” to be one of the greatest films of all time. Many films have paid homage to “Citizen Kane,” films all the time get compared to it and people all around the world consider it to not only be the best American film of all time but one of the top 5 in the world. In fact it is one of the films preserved in the National Film Registry and was called by the Library of Congress “culturally, historically and aesthetically significant.” But why is that? Certainly it may not have the action of “Die Hard,” or the special effects of “Transformers,” but what it has is innovation, creativity, gall and charisma. The film was years ahead of its time. The story was controversial and topical at the time, taking stabs at William Randolph Hearst and Marion Davies. It was even more controversial when it was blackballed by Hearst and forced out of theatres and called communist. It went so far to the point where the film was booed at the Oscars whenever it was listed as a nominee. But when more and more people saw it and REALLY saw its beauty, its artistry, its creativity and one of the deepest stories of its time and still probably of all time, its popularity skyrocketed. Critics everywhere loved the great writing and the phenomenal acting along with a great story that kept people interested through the entire two hour film. Welles’ portrayal of Kane was brilliant, emotionally driven and engaging. You felt his pain and his sorrow but you also felt his joy. Critics everywhere have plenty of different reasons for why its considered to be one of the best but I think it boils down to the story and the cinematography.

The story itself is like a metaphysical detective story of sorts, where each person’s story of Kane being different and spanning many different years of his life, from childhood to an old man. Whether it’s the story of Thompson and his movie long search for Rosebud and the meaning behind the word, or the different stories from the different characters perspectives, like Leland, Susan, Thatcher or Bernstein each story is like a jigsaw puzzle with one missing piece: Rosebud. If that missing piece is filled in then these five stories will come together to create one large story: Charles Foster Kane…his life and legacy. We, as the audience, are forced to decipher these pieces of the puzzle to truly know who Kane was and, up until the end, figure out what Rosebud truly is. It’s a brilliantly told story that goes deep into a man’s inner being and through allegorical and metaphorical means tells the tale of a man who started with pure intentions and as money, greed and power took over, corrupted him and turned him into a shell of his former self. The story alone could be one of the reasons why film scholars consider it one of the best, if not the best film of all time.

The cinematography is a true sight to behold in this film. Gregg Tolland was inventive, ingenious and way ahead of his time. He and Welles spent countless amounts of time researching all sorts of different films; each considered to be the best ever, took their unique styles and combined it all into one to create a new hybrid style of filmmaking. One of the biggest innovations that were integrated into this film was deep focus. Almost every scene was shot with deep focus. The foreground and background were all in focus and, in some parts of the movie, integral to the narrative of the story. Another innovation was in camera effects like in the opening scene with the snow globe, the matte that stayed in the same place, and the glass with the spoon during Susan’s suicide attempt. The other major innovation with cinematography was the use of low angle shots. While low angle shots had been used before, the WAY Tolland and Welles did these low angle shots and just how low they actually went (cut a hole in the floor) to get there shot was remarkable and something that hadn’t been seen before. It was also one of the few times you saw a ceiling as the BACKROUND (that’s how low they got) which was something you never saw because most studio sets did not have a ceiling.

Many people agree that the editing and the actual camera movements, not just the cinematography and where everything is placed, is wonderful. There is one specific pan shot in the movie towards the end that has been spoofed and paid homage to in numerous films. The shot takes place shortly after Thompson’s last line when they pull out to reveal the whole room. The camera than pans across the room showing thousands of items, boxes, paintings and whatnot that go on for what seems like forever. This pan shot shows just how MUCH he really had and almost symbolically showed everything that he had done and accomplished in his life. That shot has been replicated in many films, most notably in Indiana Jones. The second most notable one is the tilt shot, or how it’s used in the movie, the Dutch angle. When Kane is giving his speech and is pulling his arm back and then leaning forward, all of these are an example of a tilt shot. They show a sense of power, a sense of urgency. It really goes deep into showing a characters reaction as well. It conveys Kane’s power struggle and his giving into power quite well. The third most notable one is the dolly shot. The dolly shot is quite a lot especially on Kane himself. When he is younger and moving around a lot more, the dolly shots are quicker and faster in their movements, like when he returns from Europe only to rush out the door. But when Kane is older the dolly moves a lot slower and deliberate like the shot of Kane’s house outside of Colorado that ends on the far side of the table along with the shot where he is coming down the stairs to Susan. It really conveys a sense of age in this movie. The final is the close up. The most famous close up is probably the first one in the beginning of the movie when it’s a close up on the lips. Because this is a close up shot it shows the importance of his last word and the importance that word will have to the story. This use of the close up is able to put emphasis on the word so that it is always in the back of our minds while we watch this film. The editing is marvelous too. Look at the opening shot when it’s slightly dissolving and getting closer and closer to the mansion. It never truly fades to black, with the light in the window always being visible, but it is always dissolving into a different part of the mansion. The dissolve plays an important part in the movie when showing flashbacks of the film as well. But that isn’t the only important editing technique. The “News on the March” scene is one giant montage of Kane’s whole life. You see, through this montage of newspaper clippings and stories, his entire life and career. After this scene his life story gets looped over and over from different perspectives. The film has a Pulp Fiction way of telling its story although now I believe that Pulp Fiction took from Citizen Kane. It’s told out of order and in different parts of his life throughout the entire movie. This is almost on purpose so that we can always be guessing what Rosebud is and so it IS like a giant jigsaw puzzle. And when we finally see what Rosebud is, we realize that we had seen it and knew what it was all along. It was INSIDE the snow globe. It all comes full circle.

It doesn’t matter what part of the film you want to take. The cinematography, the story, or the editing, are all great reasons why this is considered to be the greatest movie of all time. It doesn’t even have to just be one of them. All of these reasons are great on their own but together they are TRULY great. It’s a brilliantly told movie and a wonderful film to watch and by watching it, it should become crystal clear why this film “Citizen Kane” is considered to be the greatest film of all time.