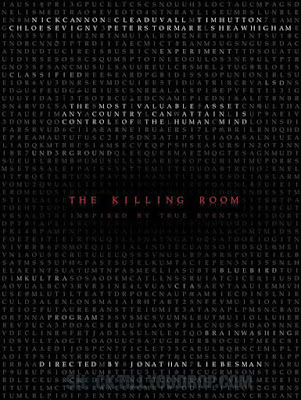 As a fan of Clockwork Orange I was always interested specifically in the behavioral modification scene (aka the Serum CRM-114 scene) and where that idea could have came from. Most people rumor that it was directly linked to Project MK-ULTRA (Which i just call McUltra), a secret CIA program that worked as a sort of mind control program. Well due to civillian casualties the program was shut down. But what does this have to do with a Nick Cannon thriller that sounds like an alternate title to Saw? Everything actually.

I jokingly watched this movie after reading that it was a mix between Cube (awesome movie) and the original Saw (even awesomer) so I was intrigued. When I started it, it started to describe project McUltra and its history. While Im wondering why they are doing this we are introduced to Ms. Reilly (Chloe Sevigny), a behavioral analyzer and Dr. Phillips (Peter Stormare) a Russian-American-Transylvanian-Southern accented Doctor who is behind the reintroduction of the McUltra program. My joke with his accent is that it changes every scene apparently. But what does this have to do with a killing room? Well 3 dudes and a chick are put into a room, given a questionaire and after one is shot in the head, the remaining three are left to fend for themselves, until one is left. That's essentially all I can reveal but it IS a mix between Saw and Cube, except with more political and psychological undertones in my opinion.

Killing Room is a decent psych thriller. The actors do a good job and Nick Cannon especially does a really good job. My only issue would probably be that its a bit too long and maybe a bit too slow at times. There arent any real glaring flaws to me, but at the same time it just kind of feels middle of the road. Not bad but not great, just decent.

If you like psych thrillers or are interested in McUltra or political undertones in your thrillers than this is a pretty good movie to see. Otherwise its a decent enough movie that kept me interested and was a good timekiller if nothing else.