Everybody betrayed me! I fed up with this world! 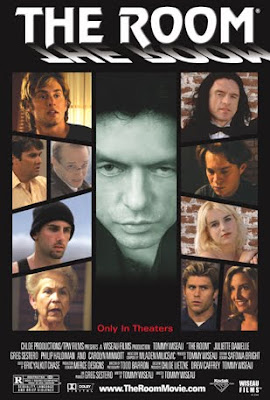 I really just wanted to let the movie speak for itself. Tommy Wiseau's "masterpiece" The Room (which he wrote, directed, produced, starred and executive produced) has become one of the biggest cult classics around. Its laughable dialouge, its Shatner esque delivery of every line, the subplots that go nowhere and the incessent need to say Hi (enter name) any time someone comes in, the overly long sex scenes, the melodrama...its all horrible but at the same time brilliant. Stay with me now:

Think about it this way-The Room is percieved as a drama by most critics. Wiseau calls it a black comedy. As a drama its one of the worst movies ever made. As a black comedy its a hillarious film that is worth watching over and over again.

If you don't already know, or are one of the many people who have yet to see this, The Room is about a love triangle between three people: Johnny, an interesting as paint drying but kind hearted man, Lisa, Johnny's future wife who is fed up with him, and Mark, Johnny's best friend. There is a lot more to this plot, in fact there are plenty of subplots interspersed throughout this entire movie, but the main plot focuses on this love triangle.

There's not a lot of NICE things to say about this movie. Its poorly acted, poorly written, poorly directed and just not that interesting to watch. But in this horrible movie is a gem. If you go into this movie with the right mindset (or a good drinking game) then its one of the most fun movies I have ever seen. Its so bad its good. I think if you look up that saying in a dictionary that this movie poster would be under it.

Like I said, if you go in with the right mindset than this a great movie. Be forwarned that this is NOT a good movie but a hillariously bad one that is always fun to watch. I reccomend seeing it.