If you're gonna ask if you can ask me a question, give me time to respond. Unless you're asking rhetorically, in which case the answer is obvious: yes 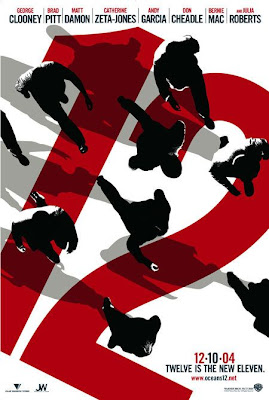 Oceans 11 was one of the greatest, if not the greatest, ensemble film of all time. Mixing action, romance, suspense, tension, comedy and robbery it was suave, it was cool and it was great. Danny Oceans 11 was a great group. You had Brad Pitt, Scott Caan, Casey Affleck, Matt Damon, George Clooney, Carl Reiner, Don Cheadle, Bernie Mac, Elliot Gould, Eddie Jemison and Shaobo Qin all together on one screen pulling off one of the greatest heists of all time.

Oceans 12 picks up shortly afterwards as Terry Benedict (Andy Garcia from the first movie) captures all the 11 and shakes them down for all the money that he lost. When the group can only collectively get about half, Benedict forces them to commit another heist to get it back, this time in Europe. Joining the 11 in their quest is Tess Ocean (Julia Roberts), Danny's wife. Their ultimate goal? Stealing the Coronation Egg. And with Isabel Lahiri (Catherine Zeta Jones) after them this heist is going to be much harder than before.

Its hard for a sequel to live up to the original, I understand that. But when you got all these great actors on one screen you think it would be better. Sadly the movie altogether seems rather forced and straining for humor. The celebrity cameos are odd, unnecessary and provide kind of Robot Chicken/Family Guy esque "WAH WAH" humor. It is a lot more cheese and a little less good.

But Oceans 12 is by no means a horrible movie. Its still enjoyable and Pitt and Clooney are great together on screen. There are plenty of great gags and jokes and its always nice to see Julia Roberts. Its just too bad that they didnt put more effort into 12...if they had it would have been great. As it stands, it is the weakest of the three but still a good movie by my standards.