"What are you doing?" "Cloud bursting, it keeps me sharp...and it's gone!" 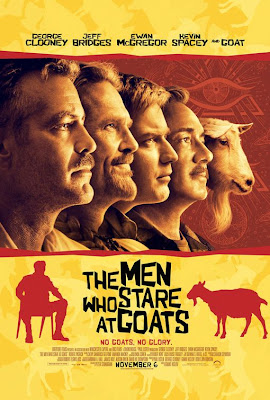 Hello I am the movie encyclopedia and if no one else will see it, I will.
George Clooney, Ewan McGregor, Jeff Bridges and Kevin Spacey. Add them together with a wild conspiracy theory involving psychic "jedi warriors" and stopping goats' hearts and what do you get? The Men Who Stare at Goats.
By reading the title out loud you should already have a good idea about whether or not you will see this movie. Say the title out loud right now. If it sounds hillarious or at least intriguing then you should go see this movie. If it sounds stupid or too out there, then stay away from it. In my opinion it sounded hillarious. I am a huge fan of all things George Clooney and the previews were pretty funny. So this past weekend I sat down and watched this cleverly titled film and what did I get? A decent comedy that lacks a punch.

TMWSAG is based on the 2004 book by Jon Ronson which detailed his exploits and investigations into the New Age techniques of the army. The story of the movie follows Bob Wilton (McGregor), a journalist who goes to Kuwait in hopes of becoming an embedded soldier only to discover Lyn Cassady (Clooney) a self proclaimed "Jedi Warrior" with psychic powers he developed under the governments NEW EARTH INITIATIVE run by Bill Django (Bridges). Wilton is suspicious of his claims but follows him around anyway because his story is so interesting. The movie bounces back and forth a lot. One minute it looks like we are in 03 and then all of a sudden we are in 73 or 83 and then back to 03 all over again. The plot is fairly constant though, albeit a bit muddled, with either Clooney or McGregor doing voice over to tie it all together.

Its funniest moments are thanks to Clooney and Bridges who provide such an over the top performance that they are just a joy to watch. Every word that Clooney says and every thing that Bridges or Clooney does is FUNNY. Its not fall out of your seat funny but it was enough to make me chuckle with the occasional laugh out loud. Spacey and McGregor lack, playing the straight men a little too often. McGregor has a few funny quips but they are few and far between. Spacey on the other hand was a confusing character bouncing from antagonist to protagonist to just a complete nutjob so much that I couldnt decipher whether to like him or not.

My criticisms are mild however. The film is well acted with no real BAD performances. The laughs are there and there are a few HUGE laughs (from Clooney and Bridges obviously). The story is intriguing although completly crazy and overall its an enjoyable film. Not an award winner but worth the price of admission.
MY VERDICT: SEE IT
Posted by xTJMac510x at 10:50 PM