Come. We must return. Those two fools who run my theater will be missing you 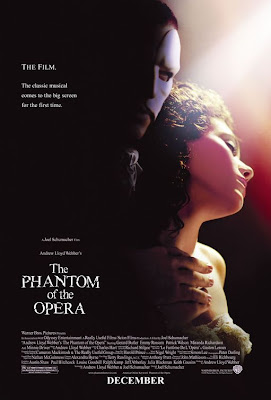 
Have you ever walked into a film not knowing who the actors are, or who is directing, or any of that, have not read the reviews, haven't seen a trailer or anything like that, and walk in for the SHEER reason you LOVE the source material? I know I have and that is how I felt with Phantom of the Opera.

Phantom has always been one of my favorite musicals of all time. Mixing opera music with intense ballads and a gripping story of forbidden love, disfigurement and violence. It has been and always will be a HUGE broadway staple and continues to be done all around the world. It remains one of the most recognizable names in broadway and the mask alone has become synomonous with musicals.

So imagine my weird mix of anger and curiosity when they said they were going to make it into a movie. And a movie with trained singers yes but actors by trade. No famous broadway people? Blasphemy! Who the hell is Gerard Butler and Patrick Wilson and Emmy Russem?! How dare they play these parts?! But in 2004, before these actors became almost household names, they were practically unknowns and starring in a musical that had die hard fans like myself.

Well I went in and sat down and watched this movie. After it was over I gave it a standing ovation and bought tickets to the next two shows. Phantom the film still holds the record for the most times I have ever seen a film IN theatres (Shaun of the Dead has the highest total with 51 views and counting).

So you know I think it was a good movie but WHAT was it about? Well the story of Phantom takes place mostly in a flashback of Raul, a noble man who is in love with a theatre backround dancer turned star opera singer Christine. While Christine and Raul DO love each other, Christine has always had this deep crush on the man who taught her how to sing in her dreams, the phantom of the opera house. The angel of music. But when the phantom appears and takes her away, she realizes she must be with Raul and that she cant be with him. Enraged he goes on a personal vendetta against the opera house. All the while we learn the truth BEHIND the mask.

Its a gripping, heart wrenching and passionate story. The music and lyrics are beautiful and powerful and all the actors and singers are great. Andrew Lloyd Webber (the creator) did oversee this film.

Its always going to be one of my favorite films and if you havent you MUST see this movie. I now leave you with a few of the songs from the movie.