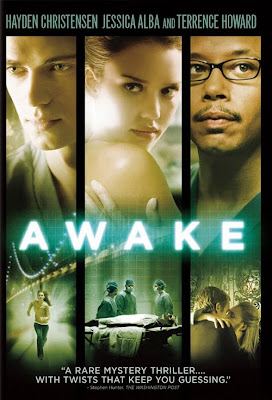 Don't read other reviews for this movie, especially if they describe the story in detail. Don't wikipedia the plot beforehand. Don't look at the other ominous poster that gives away one of the major plot twists IN the tagline. If you can do that then 2007's under the radar and critically panned (except by Ebert of course) Awake starring Jessica Alba and Hayden Christensen will be one of the best thrillers you have ever seen.

More often than not I find myself deviating from my lists of movies I need to review and just sitting down and watching a random movie on demand. One of the first movies that popped up was this one. Its a story about a wealthy billionaire Clay (Christensen) who has a great life, a great fiancee Sam (Alba), a great friend Jack (Terrence Howard) and an overprotective mom that dearly loves him (Lena Olin). He only has one problem though: a faulty heart and he needs a transplant. That shouldn't be a problem though since his buddy is a doctor right? Well THAT is not the problem. The problem? He can feel and hear everything that is going on during the surgery, something known as Anesthesia awareness.

Ya know one of my favorite books by Stephen King is his short story collection "Everything's Eventual. In "Everything's Eventual" the first story is called Autopsy Room 4. In Autopsy Room 4, a man is bitten by a snake that completly paralyzes him and halts his breathing and pulse giving him the appearance of being dead. No matter what he tries he can't wake up but he can feel everything that is going on. Its been done in a lot of other books and movies and Awake is a lot like this story. The difference? Its shorter, overall better written and contains SLAP YOU IN THE FACE twists that leave you going WTF!!??

And thats the great thing about this movie. It is SO engaging and it absorbs you completly that you will be talking to the characters throughout the whole movie. Hayden Christensen, who I usually don't like, brings a great energy to this movie and he plays his role perfectly. The same goes for Olin and Howard but the standout role is definetly Alba. Honestly to me this is her best performance ever. She is easy to love, she delivers her lines perfectly and you REALLY care about her character. Its great, to me, when a film has such great writing and is backed up by great performances.

Well as usual this is a case of critics getting it wrong to me. Most of them wouldnt even give this film a chance and wrote it off without actually thinking about it. But most of those critics wikied the plot probably and were watching it from a distance instead of letting the film draw you in. If you can do that then this is a great movie that really defines psychological thriller.