You know what they say, you're either SWAT or you're not. 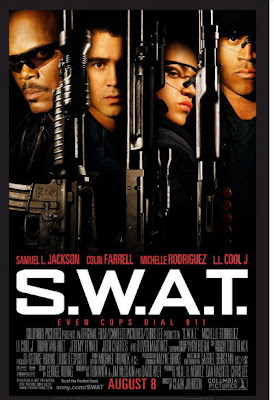 I will apologize in advance but this is going to probably be my shortest review Ive done probably. Its not there is so much WRONG with this movie more so that there isnt that much RIGHT with it either. Its just another subpar action movie in a sea of subpar action movies. But oh well here goes:

SWAT is based on the old 1970s TV show of the same name and follows the story of Jim Street (Colin Farrel), a shamed SWAT who is trying to prove that he is worth being on the team again after a bad incident occured and he was kicked off. Agent Hondo (Samuel L. Jackson) is an inactive member of SWAT that was brought back into action to create a new and better team worthy of the SWAT name. Honodo picks Street among others (Michelle Rodriguez and LL Cool J to name a few) and they hunt down a drug lord.

The acting is average. No real person stands out besides Samuel L Jackson and that is because he only talks in shouts. Everyone is just kind of dull and mostly just THERE. The action is interesting but not really memorable. The twists you can see a mile away and the plot is about as deep as an episode of Law and Order (and thats an insult to Law and Order).

Its not a bad movie but I cant really reccomend any reason to see this movie besides wanting to see every LL Cool J, Sam Jackson, or Colin Farrel movie. Not bad...but not good.