Here's a rather long record. I hope I'm here at the end of it. 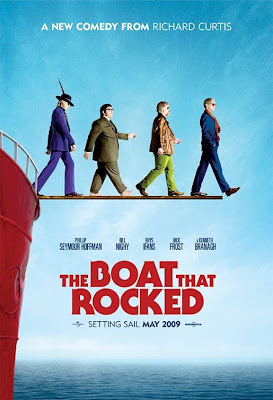 Richard Curtis has made some of the most charming British romantic comedies of our time. He has a knack for making great and memorable movies that I still get a kick out of now and again. Well in early 2009 Curtis released his latest hit, a somewhat historically accurate retelling of Radio Rock, a music station that broadcasted out in sea all over Europe that was loved by fans and hated by the government. The government even went so far as to call them Pirate Radio stations. The original British film was almost 3 hours long but was cut down to 133 minutes for the sake of most audience members. When word came that this film was a success, despite a few flaws, North America wanted to get a hold of it but wanted to change its title to something shorter and edgier...so they renamed it Pirate Radio and cut it down even further to less than two hours, making it even easier on American audiences. Well I saw the original theatrical British version, 133 minutes and all, and am basing my review off that. Its essentially the same film but with a few added parts and a different name.

On an interesting side note though, when I tried ordering tickets for this on Fandango, the person on the other side said the movie was STILL called The Boat That Rocked. Oh and also if you want to hear Radio Rock, now renamed Radio Caroline, go to your itunes, open radio, go to rock/alternative and go to Radio Caroline. That's the radio station this film is based off of.

The Boat That Rocked (Im calling it that so STFU) takes place in Britain during the 60s. During this time pop/rock music was extremly limited on the radio airwaves so a bunch of renegade DJs came together to create pirate radio stations. The most popular of these was Radio Rock headed by The Count played by Phillip Seymour Hoffman. His crew consists of a bunch of DJs, all played by great comedic actors (including Nick Frost). Their boss, played by Bill Nighy, makes sure that everything runs smoothly.

Thats all I really CAN tell you. I could describe everything a lot more in detail but the film actually does a lot of describing FOR you. Also there are a lot of great moments I don't want to spoil and above everything this is just a blast to watch.

First off the soundtrack is awesome. Any fan of 60s rock will be pleased with the selection of tunes used in the film, I know I was. On top of that the film is extremly funny and well acted. Phillip Seymour Hoffman is a talent. A brilliant character actor who can be really serious and really funny with the blink of an eye. He engulfs the character of the Count and really brings a spark to the movie. Nick Frost is definetly another standout for me. I love Nick Frost in anything he does whether Shaun of the Dead, Hot Fuzz or whatever but he really shines with comedic gold in this movie. In fact everyone does. EVERY PERSON IN THIS MOVIE HAS AT LEAST ONE LAUGH OUT LOUD MOMENT. Thats the brilliant thing about this movie. Well acted and really funny. A great combo.

I guess my only real complaint is length but thats minor since the film is very fast paced and I was never bored during the film.

If you like fast paced comedy, great performances from great actors, Britsh comedies or you just love classic rock than The Boat that Rocked (Pirate Radio) is definetly one of the best films you will see all year. In short....it ROCKS!