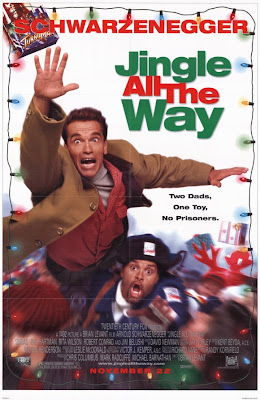 I have actually had the honor (I guess) of meeting Sinbad. My mom has always been a huge fan of him, his film work and his stand up comedy so I got her an autographed DVD of one of his comedy specials. It wasn't my intention though, I didn't go out LOOKING for Sinbad it just happened. I was walking around the Ft. Lewis PX with my grandma when I saw his booth and it was practically empty (not a popular guy). Looking over to my grandma I said, hey would you mind waiting a second while I meet Sinbad? After getting the DVD I went over to the booth and met him. I wanted to give him crap about being a lousy stand up comedian (I am not a fan) but then I thought of two things. First, he is a very large and muscular black man (when did that happen?) and he could kill me, a fat white kid, with one hit. Second is that he was in one of my favorite Christmas movies and guilty pleasures of all time-Jingle All the Way. 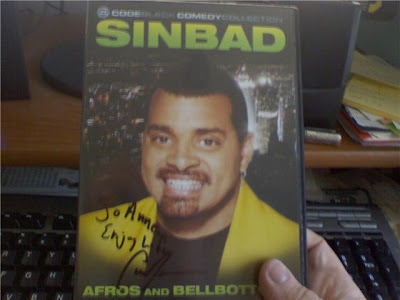 Here is the DVD by the way

Jingle All the Way is the story of Howard Langston (Arnold Schwarzenegger), a hard working businessman who really has no time for his wife and kid. After messing up one too many times and missing an important part of Jamie's life (karate upgrade from blue to purple) Howard decides to make it up to him by buying him the toy of his dreams: the Turboman doll. Turboman is a Power Rangers-esque superhero who is adored by kids everywhere so getting the doll proves to be harder than he thought. While going from sold out store to sold out store he meets Myron (Sinbad), a postal worker who too is after the doll.

Its poorly acted for the most part. Sinbad is laughably bad and Schwarzenegger is hillariously bad. The only good performance is from Phil Hartman (RIP) as the divorced neighbor who can't stop hitting on Howard's wife. The humor is horrible and cheesy and full of wah wah moments. The plot makes little sense and is pretty poorly executed, hokey and has a very cheesy ending.

But despite all these complaints its always been a guilty pleasure to me. I watch it every Christmas and despite being horrible, its hillariously bad (so bad its good) and fun to watch. Its a great holiday kids film and I love it. I hate to admit it but I love this movie.