Fear not the weapon, but the hand that weilds it 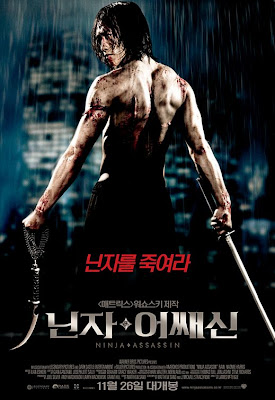 This is probably THE most honest movie I have seen since Shoot em Up. Everything you need to know about this movie is listed in the title (I went with the Korean poster because its more badass)! Its about a ninja who is a deadly assassin and kills people. Honestly if you go into this film expecting more than you need to get hit in the face really hard. That is one of the biggest beefs I have with most professional critics is that they go into every film expecting Citizen Kane. Only fellow LAMB reviewers and other assorted critics actually understand that not every film is going to BE Citizen Kane. If you go into it expecting a frantic, quick cutting action film with ninjas killing each other than you get just that. Its not a masterpiece and it still doesn't hold a candle to any Bruce Lee film or even the original Ong-Bak but its still worth the 9.50-11 you would pay for a ticket.

The plot is pretty simple and for the 99 minutes that this film runs it kept me interested. Raizo (played by Korean pop sensation Rain) was kidnapped as a child and raised under the Ozuno clan of ninja warriors. He becomes one of the most deadly assassins in the world and when his friend is killed he flees only to return and vow revenge. That's mostly the plot but there is also a plot involving a Europol agent (Naomie Harris) trying to figure out who is behind a bunch of political killings but for the most part it is Raizo kicking ass and taking names.

The action in this film is great. Its quick, its brutal, its bloody and its stylistic. But then again with director James McTeigue (whose only other film is V for Vendetta), Joel Silver and the Wachowski brothers running the film what more do you expect? Sometimes it gets a bit hectic and the screen is mostly red ketchup but its always fun to watch.

The acting...doesn't matter...really it doesn't. They do a good job, all the actors, especially Rain, Harris and Sho Kosugi, the leader of the clan. But when you watch a ninja movie, you arent looking for acting. Honestly overall its the films weakest link but it was good from what I noticed.

It's thrilling, its suspenseful and its brutally violent...and it has ninjas. If you like this kind of movie than you are in for a treat. It may not be a masterpiece but I sure was entertained.