Marsha, get me Katie Couric, Al Jezeera and 100 gallons of sheep s**t! 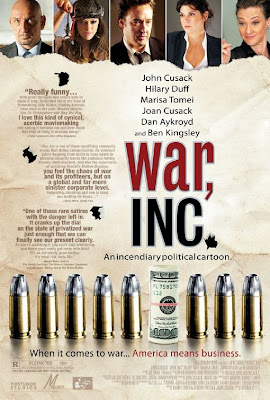 Grosse Pointe Blank is actually one of my biggest guilty pleasure films of all time. So when I heard a spiritual successor of sorts was coming out, written and starring John Cusack, Joan Cusack and Dan Akroyd like the last one and was a black comedy/political satire I was excited. I was even excited to see Hillary Duff branch out and mature as an actress. But when it came out it was PANNED by critics so all my hopes were quickly dashed for this political black comedy. But today it was on Showtime so I finally sat down and watched the whole movie. While its no award winner and not as good as Grosse Pointe Blank, its still a good comedy, well written and another movie the critics got wrong.

War Inc is the story of Brand Hauser (John Cusack), a hitman who works for the government, specifically Tamerlane, an advertising agency. Given missions by Viceroy (a computer program) and the former vice president of the US (Dan Akroyd), Hauser is assigned to kill whoever gets in the way. Hauser is a quiet man who drowns his sorrow in hot sauce because of a terrible incident that had occured to him earlier in his life. Hauser's next mission takes him to the fake country of Ugigistan where he will be a Trade Show host handling the wedding of a famous pop star (Hillary Duff) and a wealthy prince (Sergej Trifunovic'). His only friend is his assistant (Joan Cusack) and the many soldiers there although he sparks a relationship with a hard hitting journalist (Marisa Tomei) who is using him to get into the show. From there he has to balance handling all the issues with the Trade Show and the wedding as well as his next mark Omar Sharif (played by Lyubomir Neikov...not Sharif).

Its a very tounge in cheek movie featuring a lot of subtle jokes, nods and winks at the camera. Its not very laugh out loud funny but a lot of the sight gags, jabs at the government and silly lines delivered seriously are pretty fun to watch.

All the acting is well done with a surprisingly good job from Hillary Duff. Duff, known for being miss clean disney princess, plays a oversexualized Yemen Britney Spears wannabe who is totally tone deaf, a total slut, but (unlike Lohan or most disney princesses) has a big heart and a good soul underneath it all. John Cusack is great as always playing the straight man and he has actually started to grow on me as an actor. Dan Akroyd and Joan Cusack, although parts brief, are fun to watch and deliver some big laughs. Marisa Tomei is good but she felt a little flat to me.

Although not an extremly biting satire and not the biggest laugh out loud comedy ever, its a well made, well written and well acted film that was an enjoyment to watch from beginning to end. Critics be damned...see this movie!